We’re delighted to be joined on our blog by Rebecca Winters, who talks about the writing journey and inspiration behind her Baldasseri Royals trilogy.

When I was a little girl, my dear nana received what we grandchildren called the ‘gold’ book.  The cover looked like gold and was a gift from her good friend who’d been to London at the time of the coronation of Queen Elizabeth in 1953. There were pictures of the royal family, of Elizabeth and Margaret when they were little girls. I loved that book and went through it all the time looking at the castles, the horses, the pets, the royal family draped in purple and ermine for royal photographs. I even saw the crown jewels myself when I travelled to England with my girlfriend at the age of 18.

As I grew up, I followed the story of Queen Elizabeth and her marriage and her children. I was fascinated until the death of Princess Diana. Then stories came out about the family and their problems, and they saddened me.

The naissance for this series came about as I pondered what it would feel like to be born into a royal family. What hardships would one have to endure along with the title? Before long I wrote a trilogy about the 300-year-old Baldasseri Royal Family. The King rules over the Italian speaking country of San Vitano near the Italian-Swiss border. His brother rules over an eastern region of Switzerland where Romansh, along with Italian and German, are spoken. Their empire benefits from their gold mines and timber reserves.

Reclaiming the Prince’s Heart features the first story concerning the crown prince of San Vitano. When his grandfather dies, Prince Rinieri will be crowned king. But a force majeure changes his entire destiny that causes a domino effect throughout the entire family.

You’ll read about those consequences when Rinieri’s second cousin, Prince Vincenzo, must take on the mantle of crown prince in the second book, Falling for the Baldasseri Prince. But there’s many a slip between cup and lip.

Enter Princess Bella, not a candidate for kingship, is out for a day of skiing when another force majeure changes her destiny. Second Chance with His Princess, the third book in the series, alters the Baldasseri world once again.

I’ve never had so much fun writing a series. Because I’ve travelled in Italy and Europe, studied in Paris and went to boarding school in French Switzerland for a year, I have fond memories of these divine places. San Vitano might be fictional, but Italy and Switzerland are to die for. What a joy to write about them.

I’ve dedicated this series to my dear, sweet Nana Brown, my beloved father’s mother. She had three sons, no daughters. She was an angel who walked me to the park, took me downtown on the bus to see the giant Kodiak bear at Z.C.M.I. dept store, who bought me makeup to play with, who taught me everything from putting up pears, to sewing on her treadle sewing machine, to reading Bible stories and stories of kings and queens. Without her, this particular series would never have been written. I can’t wait to see her again one day and let her know how much she enriched my life! 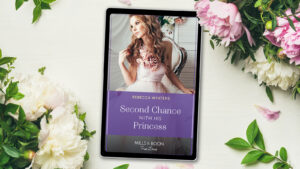 Second Chance With His Princess by Rebecca Winters

Forbidden – but unable to stay away!
It’s been ten years since Luca laid eyes on Princess Bella. Back then, their romance couldn’t survive their controlling families. Reconnecting at a romantic Swiss Alps wedding, they find a dazzling kiss soon reveals their feelings are still there! Can they overcome the royal expectations of this duty-bound Princess to finally claim their happily-ever-after…?