Marlee and Matteo avoid love after previous heartache. But, when they’re thrown together as bridesmaid and best man at a picture-perfect wedding in the Bahamas, they find themselves giving in to their unexpected chemistry.

The door to the restaurant swung open.

Oh no! Marlee felt panicked. It was Matteo. He looked even more gorgeous in the light of day then he had last night. She felt paralyzed.

He wasn’t in the tidy gray uniform the hotel staff wore. In fact, he looked exceedingly casual in a patterned button-down shirt, pressed khaki shorts, and sandals.

His hair was wet. He must have just showered.

Move, she ordered herself while Fiona was distracted by him. Well, what woman wouldn’t be?

The man had seen her bare breasts! She certainly didn’t want him to see her crumpled, pale pink sweat suit or her plate full of carbs!

She yanked the sunglasses down and pulled the cap low over her eyes. She set down her food on the nearest table, never mind the looks of the astonished people dining there.

Marlee looked desperately for an exit that would not take her anywhere near him. She saw one and slunk toward it.

Almost there. Marlee had to squeeze behind that warming tray full of scrambled eggs and then—

Marlee froze and watched in horror as Fiona raced across the room and enveloped Matteo in a hug as if he were her long-lost friend. Then, the bride-to-be turned and scanned the room.

Marlee’s hand was on the door. She hoped it wasn’t one of those exits that was for emergency use only.

She pressed down on the lever and allowed relief to sweep her when no alarm went off as the door swung open a crack. The relief was short-lived.

What? No! Matteo was not their best man. Their best man’s name was Matt. It was somebody the groom, Mike, had gone to college with. They’d been roommates.

Still, she lost that precious opportunity to make good her escape as she grappled with the fact that Fiona knew Matteo.

Fiona was gesturing her over.

She let the door close with herself still on the inside of it. If they were all in the same wedding party—and apparently they were—why put off this horrible reunion?

With one last forlorn look at the exit, Marlee reluctantly shuffled across the room.

“Marlee, this is Matt Keller, our best man,” Fiona gushed. “Marlee is one of my bridesmaids. I’ve been telling her all about you, haven’t I, Marlee?”

Yes, indeed she had.

Mike’s best man, his friend from college, had gone on to become some kind of international tycoon who regularly front-covered all the European business magazines. Fiona seemed to regard someone of his reputation and fame being part of the wedding party as a personal coup.

“We’ve met,” Marlee said awkwardly. She glanced into those turquoise eyes. She was pretty sure they were dancing with mirth. She took interest in the buffet. She didn’t offer her hand.

“You have?” Fiona stammered. “But how is that—

“Barely,” Matteo said smoothly, and Marlee shot him a look. A little smile was tickling the gorgeous line of those lips. Those lips that had touched her toes ever so briefly.

Marlee could feel a blush rising in her cheeks. Still, she tilted her chin bravely and gave him a narrow-eyed look of warning. 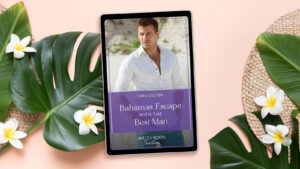 Bahamas Escape With The Best Man by Cara Colter

Bridesmaid Marlee hates weddings after being left at the altar. Billionaire best man Matteo avoids love after a devastating loss. But at a wedding in the Bahamas they find themselves giving in to their unexpected chemistry. Only when the ‘I do’s’ have been said, and their different worlds beckon, will the magic of the island make separating impossible?