Especially when it’s set in paradise!

Second Chance in Sri Lanka is the brand new romance book by Nina Milne, where two exes reunite and discover their feelings for one another are still very much real!

Read on for an exclusive excerpt…

This time with Zoe was finite and he’d better not forget it.

But that didn’t mean he couldn’t enjoy Zoe’s company for the next few days. Zoe looked round the train. ‘This is so cool. I looked it up and we can even stand in the open doorways if we’re careful. And the views are meant to be incredible.’

They absolutely were. As the journey continued they sat and watched, mesmerised by the view that sometimes flashed by the window or more often sauntered past as the train wound its way across the tracks. The landscape segued and morphed, the scent of the tea plantations wafted in through the windows an almost heady aroma as they saw the women in brightly coloured saris tend the fields, the sunlight glinting of the crops. then from tea they moved to mountains and rolling hills shrouded in mist, villages where children played, then in a blink of an eye woodlands zipped past the windows.

But if he were a hundred per cent honest despite the undeniable beauty of the landscape he found his gaze flicking to Zoe, dressed simply in cropped trousers and a sleeveless vest top, she looked fresh, cool and ridiculously pretty. He recalled last night, the brush of her lips against his, and desire jolted through him.

It was a relief to see the food vendor enter the carriage and he grinned as Zoe turned and rose to approach him, watched the dialogue conducted mostly in sign language as she purchased a selection of the aromatic snacks and brought them over to him.

‘I have no real idea what these are but they smell incredible. So I need you to taste them and try and figure out what’s in them. I think this is a vadai, it’s like a savoury doughnut made of I think lentil and then these are mini samosas and I’m not sure what this is – a kind of roll. Imagine if…. no imagine when I can make these. They will make the most amazing starters or shared platter as a dish.’

Matt took a bite and closed his eyes. ‘Definitely cumin and chilli and maybe a hint of lime,’ he stated.

Zoe picked one up and tasted it. ‘Maybe a pinch of fennel as well.’

Again his gaze lingered on her, the lushness of her lips, the look of intense concentration as she savoured the food.

‘What? Sorry have I got crumbs all over me?’ she asked.

‘No. I was just thinking I’m glad we did this. Accepted David and Manisha’s gift.’ Though once again he wondered what David’s motives had been.

Now there was a silence, almost as if they were cocooned from the sounds of the other passengers, the whoosh of the breeze through the windows. Their gazes meshed and Matt couldn’t help it – he smiled, ‘Me too.’

Her answering smile lit her face. ‘Good. I’m glad.’ She took a deep breath. ‘Over the next few days shall we try to enjoy ourselves – it is such good news that David’s op went well and the prognosis is good and this is such a beautiful place to be… I don’t want to have to keep worrying about giving out the wrong signals. We both know this can’t go anywhere, whatever this is between us, so let’s just relax.’

For just a fraction of a moment he hesitated, the words made sense. He did know this could go nowhere but that knowledge was fighting against a hope that somehow it could. A misguided hope that he had to shut down. And the best way to do that would be to call a halt now; he should get off at the next platform and take the train back. But he couldn’t. Not when he saw how relaxed Zoe looked, the spark in her eye, the anticipation. It would be OK – it was only three days; he’d take care… ‘Suits me.’ Yet a sense of disquiet remained for the rest of the journey to Burati, the beautiful city nestled in the hills of Sri Lanka. 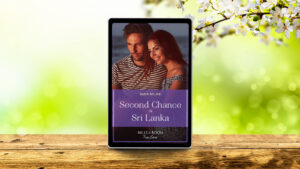 Seeing her ex-husband Matt again for her sister’s Sri Lankan island wedding was meant to bring Zoe closure—not butterflies! When they’re gifted a break alone on the paradise island afterwards, it’s an opportunity to prove they were never compatible and finally move on. Or will they discover they were always meant to be?

Read now in eBook, or in paperback which also features Secrets Behind the Billionaire’s Return by Rachael Stewart.