Jessica Gilmore’s brand-new book, Cinderella and the Vicomte is out now. Readers who enjoy uplifting romances will love this sister swap storyline packed with royal scandal.

Read more about Jessica’s inspiration below!

We all love The Parent Trap, right? What’s cuter than Lindsay Lohan as double trouble identical twins separated as babies who meet at a holiday camp and decide to swap places? But did you know that the Lindsay Lohan film is just one of several films based on the 1949 book Lottie and Lisa? I was obsessed with this book as a child which is probably why I wanted to write a sister swap book of my own. And with the Princess Sister Swap duet, I finally got my chance!

My sisters aren’t twins, nor are they identical, but they’re close enough to pass as one another in the right conditions. Clem, raised in Cornwall by her mother has always wanted to be publicly acknowledged by her father, King Zorien, and wondered what it would be like to be a princess like her half-sister. Meanwhile Arrosa envies Clem her freedom from duty and from the attentions of the press and will do anything to keep her sister safe. But when Arrosa is overwhelmed by her responsibilities, Clem proposes a life swap. She’ll spend six weeks pretending to be Arrosa and Arrosa can have six weeks living a normal life. What princess- or wannabe princess – could resist?

Arrosa is the Crown Princess of Asturia, a fictional country somewhere in the region of Andorra. I love writing  royal romances in fictional countries, it’s an opportunity for my imagination to run wild! Here are my favourite things about inventing a country and the royalty who rule them: 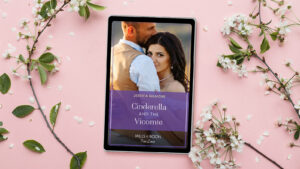 Cinderella and the Vicomte by Jessica Gilmore

In this The Princess Sister Swap story, half-sisters Clem and Princess Arrosa have always longed to change places! So when Arrosa needs time out, they swap! Posing as her sister seems simple for Clem—until Vicomte Akil d’Ortiz, Arrosa’s friend and potential convenient suitor, arrives and realises she’s not the Princess. Their instant connection suddenly makes life truly complicated…

Read now in eBook, or in paperback which also features The Single Dad’s Italian Invitation by Susan Meier.