Jennifer Faye writes uplifting novels that are full of emotion, warmth and the most romantic of happily-ever-afters.

She joins us on our blog to chat about the inspiration behind her brand new trilogy, set in stunning Greece!

I have to admit that when my editor first approached me and asked me to write this piece, I momentarily hesitated. All I could think was What am I going to write? I am not an author that can snap her fingers and come up with a book idea. My creative process is much more organic—more of a step-by-step process.

Even then, my system is not exactly streamlined. Over time I’ve learned that no matter how much planning I do for a book, my characters will hold onto their secrets as long as they possibly can—especially the heroes. Why do they have to be so reluctant to admit to their inner wounds? And the most frustrating/rewarding thing is when they admit their secret in the final third of the book. Suddenly everything makes sense, in essence it’s my big lightbulb moment. However, with the hero holding onto his secrets for so long it means I ultimately have to go back to the beginning and make lots of adjustments. In the end, it’s worth the effort.

So how did I come up with the idea for GREEK PARADISE ESCAPE trilogy? Well…I guess it started with me being tired of spending so much time at home and feeling anxious to be able to travel. Now granted I’m naturally a homebody but even I have my limits. So I let my imagination do the traveling for me. It started with the setting: a sunny island with a gentle sea breeze and a beach filled with sexy men. And that is how Ludus Island and the lavish Ludus Resort was formed. In this trilogy not only do the characters have backstories but so does the resort. I’d tell you about it but I’ll let you read about it in the books. 😉

Next came the concept of three friends that work at the resort—old friends and new friends. Hence came Hermione – the manager of the Ludus Resort, Indigo – a talented artist and Adara – the resort’s concierge. These ladies haven’t been lucky in love—at least not yet—so they throw their energy into keeping things humming along at the Ludus.

Next came the heroes. They had to be strong of character, sexy and successful. They had to be an equal match for my strong heroines. That isn’t easy as my heroines are very strong, independent women.

First came Atlas—the new owner of the Ludus Resort, followed by the dashing Prince Istvan, and Krystof—a man of chance. These heroes are most certainly up to the task. lol. Don’t let them fool you, each of these men has their own flaws and scars, but they try to keep them hidden from everyone—even me. But with some time and probing, I finally revealed those secrets.

Not only are these couples drawn together by a luxurious resort but also by a royal jewel, the Ruby Heart. It is on loan to the resort and there’s a legend connected to it. The legend says that if lovers gaze upon the jewel together their lives will be forever intertwined. Oh my! My heroines and heroes better watch out.

If you are anxious to travel to an idyllic island, I hope you’ll give the Greek Paradise Escape trilogy a chance. It starts with a romantic Valentine’s story in Greek Heir to Claim Her Heart,  and is followed up by It Started With a Royal Kiss. And while you’re enjoying those books, I’ll be working on the grand finale with Adara, Krystof and a wedding disaster, oh my! 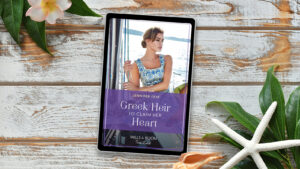 Greek Heir to Claim Her Heart by Jennifer Faye

In this Greek Paradise Escape story, managing a luxury resort on a Greek island has been a lifeline for Hermione. So when new owner Atlas arrives—gorgeous, brooding, and set on selling the resort—she has just two weeks to change his mind. But as their Valentine’s Day deadline approaches it’s Hermione’s feelings for Atlas that are changing…

Read now in eBook or in paperback which also features Around the World with the Millionaire by Nina Singh.

Nina Singh on Why New Orleans is the PERFECT Romance Setting

Sophie Pembroke: My Inspiration Behind Vegas Wedding to Forever