We can’t get enough of The Lochmore Legacy series; four stunning romances set in the Highlands. We’re giving you the chance to read an exclusive extract from each of the four stories below!

The tall, broad-shouldered figure standing before the altar sent shivers crawling up and down her spine. In desperation, Lady Flora McCrieff turned to her father, the Earl of Aberwyld, whose grip around her arm had not relaxed once on the five-minute walk from the castle to the kirk.

She quailed under that implacable green glare. Then her father bundled Flora none too gently to one side of the porch. Out of sight. Out of hearing.

‘Ye’ll not disgrace me again, Flora,’ he hissed. ‘D’ye hear me?’ He shook her arm. ‘Ye’ll do as I bid ye—for the love of your family and your clan. Think of your brother and your sisters. You owe them this.’

Her stomach roiled so violently she had to swallow several times to prevent herself being physically sick. She mentally scrabbled about for more of the persuasive arguments she had rehearsed in her bedchamber as her maid had prepared her for this wedding. Her wedding. To a man she had never met. To a man whose name she had never heard until Sunday—two days ago—when her father had announced her forthcoming nuptials.

All her protestations had fallen on deaf ears. The banns had already been read and finally she understood why she had been forbidden to attend church services on the past three Sundays.

Why didn’t I run when I had the chance?

Unlaced by the Highland Duke by Lara Temple

‘Lady Theale is here, Your Grace.’

Benneit didn’t know what was worse—those words or the explosion of light that struck him as Angus hauled back the curtains. He groaned on both counts.

‘Aye,’ Angus replied and positioned himself at the bottom of the bed. With his scarred face he looked like one of the gargoyles carved on to the embattlements at Lochmore Castle come to perch by Benneit’s bed to remind him of his duty. Benneit shoved his head into his pillow.

‘What the devil does she want?’

Benneit tossed the covers aside and scraped himself off the bed.

‘Over my dead, drawn, quartered and pickled body.’

Angus grunted. ‘Aye, lad. Shall I shave you?’

It was more a suggestion than a question and instinctively Benneit dragged his hand over his jaw, wincing at the rasp.

‘No. She shall have to accept me in all my glory. What time is it?’

‘It is gone nine in the morning.’

‘Nine? Nine? I’ve barely slept three hours. What the devil is wrong with that woman?’

Angus’s scarred face twisted into a momentary and awful grin.

‘You can sleep when you’re dead, Your Grace.’

It was Benneit’s turn to grunt as he dragged off his nightshirt and went to the basin. There was a brutality to Angus sometimes and whether he meant to allude to Bella or not, it struck up her image, interred in the Lochmore family crypt. Eventually he would be there, too. A fate worse than death… He breathed in to calm the reflexive queasiness at the thought, reminding himself that when that day came he would at least know nothing of it.

A Runaway Bride for the Highlander by Elisabeth Hobbes

They came from all over Scotland, converging on Stirling. The young with fire and anger in their bellies, the old with steel in their sinews. They came from the Highlands and the Lowlands, the borders and the isles. They came bearing weapons and grudges and wounds. Crushed by defeat in battle, yet unbroken in spirit, the Chiefs and the Lairds gathered together.

Stirling Castle loomed on rocks that fell away steeply on three sides. It was an imposing sight by any measure, visible from miles around, far over the winding Forth River. At dusk with the sun blood red behind it, the effect was doubly striking. Flaming beacons at either side of the Forework cast eerie shadows over the six soaring towers and seemed to breathe life into the stones themselves. The Forework became a skull, the windows black eyes and the great central doorway a gaping maw ready to swallow all comers.

Sitting astride his horse in the slow procession that wound from the city huddled beneath the rock towards the great gateway, Ewan Lochmore shivered at the disconcerting image that had entered his head.

He considered himself a rational man, not given to believing tales of eldritch creatures that his grandmother had told him and his brother every Samhain Eve many years ago. Even so, as he drew nearer and nearer he was filled with foreboding that once he passed beneath the stone arch his life would be changed for ever.

Secrets of a Highland Warrior by Nicole Locke

‘I don’t like this.’ Rory surveyed the landscape surrounding him and his men. Tall branches bending slightly in the spring breeze, birds calling softly, the stream mere horse-lengths in front of them, rushing past carrying winter’s melting ice.

Around them was nothing else but rolling fields and a wide sparse treeline that had been manned and maintained to remain that way since before he was born. Enough trees for game, but not enough for enemies to hide behind.

Not that there should be enemies while they stood on Lochmore land, but across that stream…

‘Perhaps they are waiting over that ridge.’ Paiden sidled his horse alongside his and whispered low.

Rory didn’t turn his attention to the other men. They had maintained their position and were far enough behind to not hear the words that Paiden inevitably desired to share. Of the same age, if different temperament, Paiden had been at his side for as long as he had memory.

Paiden had been talking for that long as well and Rory was used to his friend’s humour even in the direst circumstances. Now, on this mildest of mornings, the circumstances weren’t dire, but they weren’t safe either. His men, well back from the stream few ventured near, didn’t need to hear words to comprehend their predictament.

‘How likely is it that a garrison of McCrieffs and their horses are crouching behind a hill no taller than a couple of rabbits could breach?’

‘Oh, as likely as toothless Joan is capable of eating overcooked venison.’

Not likely at all. There was no one to greet him and his men this fine spring day. Twenty of them in all here, one hundred more waiting at the castle should he make the agreed signal. Twenty was enough of a force for the expected confrontation, but not enough to provoke a first strike. If the McCrieffs wanted a fight, then there were enough to defend the Lochmore claim. If they wanted to negotiate, the numbers weren’t so intimidating that the possibility was there as well.

Months had gone into the planning of this day. A fortnight spent on discussing the number of men, the weaponry, the day and the hour. Rory was prepared for every likely scenario when it came to this day. The nothingness they faced wasn’t any scenario at all.

Which was why they stayed on the Lochmore side of the stream. Across the water was the beginning of McCrieff land. Or what was McCrieff land. It was now his by royal decree. 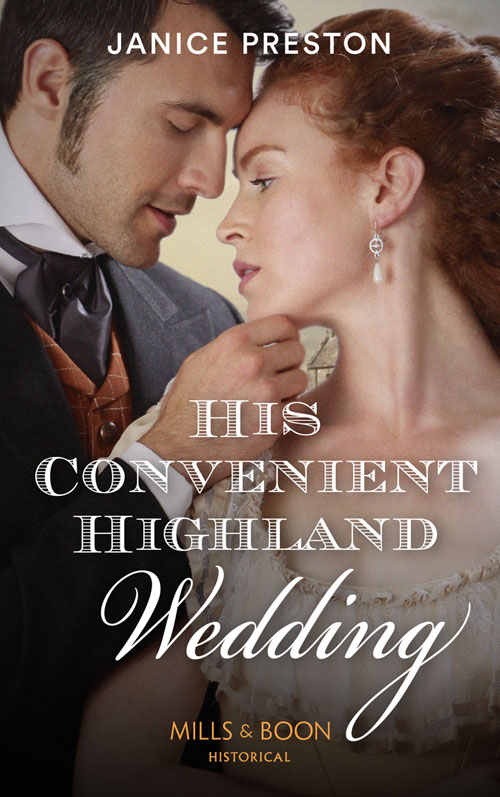