We caught up with the captivating Jackie Ashenden who talks to us about her new Modern romance, Pregnant by the Wrong Prince which is all about forbidden love!

To start with, I made the hero the most off-limits man in the world for my poor heroine. Not only is he the older brother of the man she’s expected to marry, he’s also the Prince Regent of her country. He’s ruling until his younger brother comes of age, and she’s known him since she was a girl. She’s been brought up to marry the prince, but then I went and made life harder for her by having her be helplessly fascinated not by the prince but by his much older brother. And of course she can’t have him, not when she’s duty bound to marry the prince.

Next, I decided the hero needed torturing, so I made him a stickler for rules and propriety. Then I got him wandering around the palace one night and ‘just happening’ on the heroine, who’d taken to sitting in her father’s office (he’s one of the advisers to the Regent) at nights and secretly drinking her father’s whisky. They’re both shocked to see each other, but when she offers him a drink, my poor hero just cannot say no. They meet in secret weekly, forming a friendship that soon becomes something more, but alas for my poor hero! Not only is she his younger brother’s intended bride, she’s also an innocent. He’ll never touch her and he’s come to terms with that.

Except there’d be no story if something hadn’t happened to overturn their best intentions – or rather if the author hadn’t made their lives even worse (hehehe). I made my heroine decide to get rid of her inconvenient attraction to a forbidden man by spending the night in the arms of her husband-to-be, but…well. The room she finds herself in isn’t her fiance’s. And the man in the bed isn’t her prince.

I kind of love the idea of the hero turning up and stealing the bride from right in front of the altar, so that’s what I did. My hero turns out to be quite the rule breaker when he finds the forbidden princess pregnant with his child (she’s told no one! It’s supposed to be a secret! Lol!). She’s about to marry his brother, but he really can’t help himself; he picks her up, chucks her over his shoulder and walks out!

And after that comes the best part — when the hero and heroine figure out that what was forbidden was actually entirely meant-to-be. 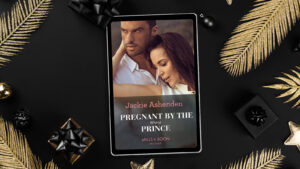 Pregnant by the Wrong Prince

Moulded to be the perfect queen, Lia’s sole rebellion was her night in Prince Rafael’s powerful arms. She never dared dream of more. But now Rafael’s stopping her arranged wedding – to claim her and the secret she carries!

Read Pregnant by the Wrong Prince by Jackie Ashenden in eBook here. Or in paperback which also features Returning for His Unknown Son by Tara Pammi here.

Exclusive Extract: Promoted to the Greek’s Wife by Lynne Graham

Michelle Smart and Louise Fuller on their sexy new duet set in the Swiss Alps!