We’re delighted to share an exclusive excerpt of Promoted to the Greek’s Wife by Lynne Graham, which is out now!

‘Close the door,’ he instructed.

‘I’m asking you to marry me. No more pretending, no need for us to fake or lie about anything.’

Cleo was stunned by the concept. Her upper lip lifted as though she was about to speak and then met with her lower again as she thought better of the hasty refusal ready to tumble off her tongue. ‘But you’re not in love with me…why would you ask me to marry you?’ she asked stiffly, as though she were afraid that he could be pranking her for some nefarious reason of his own.

‘I don’t do the love thing…or the love thing doesn’t do me,’ Ari murmured calmly. ‘I’m almost twenty-nine and I’ve never been in love. I’ve met women I like more than others, but I’ve never wanted to keep one of them. But you’re different.’

‘How am I different?’ Cleo pressed tightly and she felt as if her world were riding on his response. His opinion shouldn’t matter that much to her, but she was discovering that it did—indeed, that his opinion mattered very much.

‘You get on great with Lucy and she needs you. I can be a lot of things for her benefit, but I can’t be a mother,’ Ari intoned wryly. ‘She deserves a mother after her poor start in life and even though she’s not your child I believe you are capable of loving her. Not every woman could offer that to a little girl who is not her own. The minute I decided that I wanted to adopt Lucy I realised that I would have to be very careful about any woman I brought into her life.’

Cleo focused her attention on a corner of the desk to the far side of him and her eyes prickled with stinging tears. He was giving her the truth, but it was a truth that could only hurt. He was asking her to marry him for his niece’s benefit. He needed a wife, whom he could trust to be kind to Lucy. And on one score he was correct, she was very capable of loving that little girl and would be eager to take up the opportunity, if only it didn’t entail marrying a man who didn’t love her.

‘I’m quite sure that there are other women who would be equally caring with Lucy,’ Cleo declared, striving to rise above her instincts. Instincts that cruelly told her to immediately accept Ari’s proposal because she wasn’t likely to get him any other way. And she was realising for the first time that she wanted Ari, like really, really, really wanted Ari for much more than a casual affair. When had that happened? When had feelings crept in to weaken her objectivity? Why had she kidded herself that she could stay uninvolved when every scrap of evidence had indicated the opposite?

‘No doubt there are other women, but I doubt if any of them would attract me to the extent that you do. We share dynamite chemistry—’

‘And you would marry me just for that?’ Cleo questioned in disbelief.

‘Sexual compatibility is pretty high up my list of non-negotiable necessities,’ Ari acknowledged without embarrassment. ‘I have no plans to play away outside my marriage like my father did. No child of mine will ever have to deal with the situation I’ve found myself in.’

Cleo sealed her lips on the urge to tell him that he was too rigid in his viewpoint. Had his father planned to have a second family? Or had that been something that just happened?

‘And of course, eventually, I would like children of my own with you,’ Ari informed her levelly. ‘I’m suggesting a perfectly normal marriage—possibly one built on a more practical foundation than most, but that doesn’t mean that it couldn’t be a good and successful marriage.’

Silence fell while her thoughts raced like trapped animals running in circles inside her head. She wanted to say that she would think about it for a while, but she knew she would only be saying that for the sake of her pride. She had always assumed that some day she would marry and have a family. She had also assumed that the man she married would love her, but nobody got everything they wanted, she thought ruefully. With Ari, she was boxing above her weight. He was rich and gorgeous and very honest about his expectations. He wanted what she wanted and she very much wanted him and Lucy. She had fallen headlong in love with that little girl and needed to be involved in bringing her up. Ari could make them both happy, was already making Cleo happy if she was honest with herself, only that happiness had felt very, very risky and short-term in nature because she had naturally assumed that what they had together would not last for long. Now Ari was offering her something permanent and secure and she was discovering right there in that moment that she wanted that chance with every breath in her body. She wanted him and she wanted Lucy and it really was that simple. 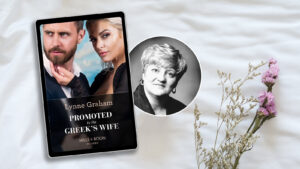 Promoted to the Greek’s Wife by Lynne Graham

Receptionist Cleo’s attraction to billionaire Ari Stefanos is a fiercely kept secret. Until one sizzling night it’s deliciously exposed! But when Ari needs a bride, to help him claim his orphaned niece, their simmering connection makes her accepting his ring very complicated!

Read now in eBook. Or in paperback which includes The Scandal that Made Her His Queen by Caitlin Crews.