Who doesn’t love a forbidden romance?

Bound by Her Rival’s Baby is the brand new book by Maya Blake. Expect lot’s of sizzling attraction and off-limits seduction in this Modern romance.

Read on for an exclusive excerpt….

She started, twisting her head to meet the sardonic dark chocolate gaze of the very man she’d been thinking about. Suddenly the air seemed crisper, the tang of ginger on her tongue sharper. The cool air drifting in from the ocean making her aware of every inch of her skin.

She hated to admit that he made everything so much more vibrant. Made her feel insanely…alive.

What did it say about her that her enemy did this to her?

But he hadn’t always been her enemy, had he?

Before that fateful weekend she’d harboured a crush that had bloomed into something stronger, more potent. But everything that had come after had shown her those emotions were a mistake, that she should be thankful it hadn’t gone beyond a torrid embrace. Like her parents, she’d learned to her cost that the Quaysons, and especially their black sheep, weren’t people she wanted to tangle with.

So why couldn’t she free herself of those electrifying minutes? Why, even now, did her face trace his chiselled features, lingering far too long on those sensual lips, remembering what it had been like to be devoured by them?

Wishing she could experience it again?

‘Cat got your tongue?’ he drawled, before his gaze fell to her drink. ‘Or is it something else? If I recall, two drinks were your limit.’

And just like that sparks flew under her skin. She glanced around, thankful that the local troupe’s beating of the kpanlogo drums was loud enough to drown out his words. ‘Not that it’s any of your business, but I wasn’t drunk that night, and I wouldn’t be so distasteful as to fall about drunk in front of my guests now.’

A smile flicked at one corner of his mouth, as if he was enjoying riling her. ‘Good to hear.’ He sipped his own drink, his gaze conducting a head-to-toe scrutiny ‘Being relaxed looks good on you.’

‘Then it’s a shame you’re here to ruin my vibe.’

His amusement turned into a full-blown smile, making her toes curl deep into the sand and her belly tighten at the transformation of his face.

Dear God, he had no right to look that breathtaking.

When she managed to drag her gaze away, she noticed the avid female looks slanting hiw way. Which only made her belly tighten harder, this time in…jealousy?

She shook her head, desperately dissipating that absurd notion.

‘I’ve spent the day interacting with a few of your guests. They speak admirably of your efforts here. You should be proud.’

‘I am,’ she replied, unable to stem the warmth flooding her at his words. But then she caught herself and forced a glare his way. ‘If you feel that way, why are you trying to take it away?’

Frustration and that ever-present hint of ruthlessness flickered over his chiselled faced. ‘Because I’ve also seen that beneath the shine and gloss things are beginning to fray at the edges. You need an injection of serious capital, and fast. Are you going to deny it?’ 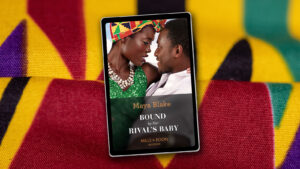 Bound by Her Rival’s Baby by Maya Blake

Why, wonders Amelie, does she feel such a wild attraction to Atu? He wants to buy her family’s beach resort so he’s completely off-limits. Yet surrendering to their heat was inevitable…and now she’s pregnant with his heir!

Read now in eBook or in paperback which also features the sexy new romance from Louise Fuller, The Italian’s Runaway Cinderella.