We caught up with the fabulous Carol Marinelli to talk all things writing romance and her sizzling new release, Forbidden to the Powerful Greek!

You’ve had a wonderful writing career so far, garnering many loyal fans and writing a wide range of bestselling romances. How would you describe this journey?

It’s a rollercoaster! The best job in the world when it’s going well, tears and chocolate when the words aren’t happening. I have three children who all know when to ask ‘how’s the book going?’ and can also gauge when it might be better to say nothing. I have a brilliant editor and I am so lucky to have that, and family and friends who are willing to listen to my plots. Then there are days, sometimes weeks of hiding and being locked into your own imagination.

I wouldn’t swap it for the world, I’d just ask it to be a little more organised.

If you could give your younger self one piece of advice about writing, what would it be?

I have so much advice I’d give my younger self, though I don’t know if it would be in regards to writing. I think the best advice is to persist. It is so easy to stop when life gets in the way or when people frown that you’re writing. Would they frown if you were going to the gym or walking or doing craft? It’s a passion and that’s a good to thing to have. Just own it and value your writing time. Guard it!

How would you describe your ideal hero?

Well, every hero I write is my ideal hero at the time of writing haha. I like that they are all different though and I really do strive for that. With that said, I argue with my characters at times, because they are different and not behaving.

I have a terrible crush on the character Saul in Homeland. I watch the entire series regularly and he gets more interesting with each viewing. So, I guess my ideal hero has enough depth that the more the you know the more you want to know….

Can you tell us about your new novel, Forbidden to the Powerful Greek?

I love him and he is possibly not a typical hero, but omg, his differences made him so attractive. He is by far too clever and so sexy. He was the only hero that could possibly have worked for Roula. They had some shared past as children and it was bitter sweet to catch up and see where life had led them. Roula deserved her Greek God!

What part of the book was the most fun to write?

Okay, Galen finding out there was no phone and no internet at this luxury retreat and Guest Services Manager, Roula, arriving with a satellite phone in a bag on her shoulder.

I am laughing now as I picture it.

What part of the book was the most challenging to write?

I found the whole book a challenge as I had a lot of characters that kept pulling me away from my hero and heroine. Roula’s past was difficult and confronting but I knew she had Galen waiting as a reward for all the hell I put her through!

What advice would you give to a writer submitting their work to Mills & Boon?

I would put the completed work away for a couple of weeks and then read it cold. Also, I love text to speech so I can listen to my story and hear when it flows and when it doesn’t. I really find that helpful as the voice adds no emotion, so it’s only words that either work or don’t.

Worry that I’m late with a book! 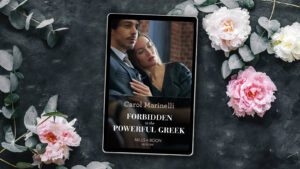 Forbidden to the Powerful Greek by Carol Marinelli

She’ll have to make the first move…

The secret to Galen’s success is his laser-sharp focus. And young widow Roula is disruption personified! Most disruptive of all? The smouldering attraction he can’t act on when he hires her as his temporary PA!

Read now in eBook or in paperback which also features Consequences of Their Wedding Charade by Cathy Williams.