The lovely Marguerite Kaye joins us on our blog today to talk about the fascinating location that became the inspiration behind not one but two stunning Historical romances.

Edinburgh is one of my favourite cities in the world, and it has featured in several of my books. Back in 2019, I decided to place it centre stage in the book that became A Forbidden Liaison with Miss Grant, which is set in the city during the state visit of King George IV – what became known as the King’s Jaunt. Though I know the city really well, I was more than happy to have an excuse for another research trip there, but what I couldn’t tell anyone at the time was that I was also working on another book which I wanted to research at the same time – in fact, I had to keep that secret for another 15 months!

I love historical connections, and I was over the moon to discover one between these two very different stories set forty-odd years apart. In 1822, when King George’s visit took place, Holyrood Palace was in a state of disrepair. Paint, red carpet and gilding were thrown at the reception rooms in a flurry of expensive activity, so that by the time His Majesty arrived, it could be used for him to hold court, but it wasn’t deemed fit for him to live in. Lord Montagu, a staunch supporter of the visit, and a relative of Sir Walter Scott, the stage-manager of the various set-piece occasions, stepped up to the mark, offering Dalkeith Palace to be at His Majesty’s disposal. This was the Edinburgh home of a certain young man, Walter Montagu Douglas Scott, the young Duke of Buccleuch. The very man who was the great-great-great grandfather of The Duchess of York, and the father of Lady Margaret, the heroine of Her Heart for a Compass.

It’s seven miles from Holyrood Palace to Dalkeith. Three hundred gas lamps were erected to illuminate the route, which took the king twenty minutes in his carriage with four horses, but which took me on a double decker Lothian bus a bit longer. Mind you, he didn’t stop to pick up passengers. When I arrived in the town almost two years ago, very little of Her Heart for a Compass had been written, but we had decided that Dalkeith Palace would be the main location for Lady Margaret’s formative years, even though she would have more likely spent her time flitting between the various family homes. When I visited, the house itself was being used by an American university and so wasn’t open to the public, but wandering around the grounds I got a real sense of the place, and sent The Duchess scores of pictures that we later pored over, and used for key scenes in the book. Though I didn’t know it at the time, the walk I took from the orangery to the stables, out of the main gate and into the town, was one that Margaret herself would take at a key turning point. Though it was atmospherically snowing in the book (it was Christmas Day and she was all alone), it was a dull and driech autumn day when I walked in her shoes with a big smile on my face.

At the gates to the palace stands the family church where we later sited Lady Margaret’s wedding. Walking through the town, where there’s no end of signs of the Buccleuch family – streets named after them, civic buildings erected by them and family crypts. There’s even a pub, The Buccleuch Arms. You get a real sense of the grandeur of the family, their influence and wealth, and it was here that I really began to understand just how much of a rebel the Lady Margaret in Her Heart for a Compass was going to be.

Back in Edinburgh, as I was about to set out on another walk which the hero and heroine of A Forbidden Liaison with Miss Grant would take, I discovered a statue of Lady Margaret’s father outside St Giles’ cathedral, and immediately sent a picture of it to The Duchess. Look, it’s our duke, I said, ridiculously excited, but knowing as one history geek to another, she would be ridiculously excited too. And I was right!

Buy Her Heart For A Compass here.

Marguerite Kaye: Beauty is in the Eyes of the Beholder 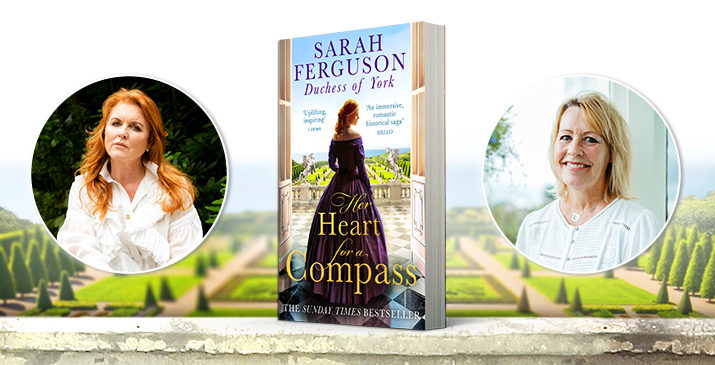 Q&A with Sarah Ferguson, Duchess of York and Marguerite Kaye!