We’re delighted to publish Liz Fielding‘s 70th True Love romance this month. She spoke to us about her incredible writing journey and what readers can expect from Redeemed by Her Midsummer Kiss!

You write for the Mills & Boon True Love series which celebrates the rush of falling in love and focuses on the emotional heart of relationships. What’s your favourite thing about writing True Love romances?

Someone once said one of the great things about the True Love series is that it’s all about the sizzle. I love that, the subtle humour that cuts through the hurt these characters are carrying and the huge emotional hit the books deliver.

There’s loss, pain, but there’s healing, true romance and, in the end, the certainty that these are two people who are stronger for having found one another. Inthe future the reader knows that they will face the future, taking whatever the world throws as them as one.

What was the inspiration behind your new book, Redeemed by Her Midsummer Kiss?

It’s always difficult to pin down exactly what inspired the moment when two characters emerge from the shadows. I knew I wanted a garden at the heart of my next story, one with a healing element. And I knew I wanted to set it in the world I began creating more than twenty-five years ago in the town of Maybridge and the villages that surround it.

I’ve written a few stories that feature the village of Upper Haughton, but I had an idea for a scene that needed a river, so I moved to the bottom of valley and the village of Lower Haughton, which had a brief mention in The Bachelor’s Baby.

Once the setting was nailed, I had to find my characters. Honeysuckle Rose, a nurse, burned-out after working in refugee camps, and suffering one loss too many, has returned to the cottage where her family has lived for generations and the much-loved garden which is now her responsibility to care for. And Lucien Grey a front-line news journalist holed up in the house next door trying to write his memoirs. A man who had seen too much and is suffering from PTSD.

Two people avoiding contact with other people. Two people who need the healing power of the garden. Once they were in place, the stage was set. All that was needed was the inciting incident to bring them face to face and the garden delivered that.

Can you tell us about your favourite scene in the book?

This is so hard, but there is a moment when Lucien has a panic attack and Honey hangs onto him, holding him, talking to him… I wrote this from personal experience, and writing it was a raw, emotional experience. Tears were shed.

How did you turn your dream of being an author into reality?

The thing about dreams is that they require hard work! I started out writing magazine articles and children’s stories – Listen With Mother, Twinkle, anyone?

I had signed up to a postal writing class for children’s stories (this was pre internet!) and was well into a longer story involving a flying carpet, a time-slip and a hair-raising desert horseback ride when the tutor – tongue in cheek – suggested that it sounded a bit Mills and Boon. I’d never read one, but I liked the sound of that and, having picked up a copy of Daughter of Hassan by Penny Jordan, I knew that I’d found my home.

I abandoned the children’s writing course and set to work on my first romance. I had three full length manuscripts rejected when my fourth, a partial this time, was picked off the slush pile by an editor who saw something in my writing.

She told me what wasn’t working – basically there was not enough conflict to carry a full-length story — and suggested I think about it and then rewrite those first three chapters.

I knew I’d been given an enormous opportunity and walked around in a bit of a daze for several days, trying to absorb everything she’d said before I set to work.  After reading my revised three chapters, the editor told me to finish the book and, nine months later that book, An Image of You, was accepted for publication.

What 3 pieces of advice would you give to a writer submitting their work to Mills & Boon?

When I first decided that I was going to submit a manuscript to Mills and Boon, I set about learning what made the books so appealing to their readers. I read as many of them as I could get my hands on and for that I give thanks to our fabulous public library system. I’d advise reading across all the series that Mills and Boon publish to discover the stories that you love. You live with a book for a long time while you’re writing it; be happy in your work.

Before you begin, ask yourself what your characters want. Deep down want. You will be taking them on a journey that will change them, leave them stronger but never lose sight of your promise to the reader. You can put your characters through torture on their journey, but no matter how hard they are fighting the attraction, the reader must believe that these two people are falling in love. That despite whatever obstacles you throw in their path, they are meant to be together.

Finally, the journey to publication is a steep learning curve and if, like me, your manuscript is rejected, take notice of any advice an editor has taken precious time to offer. It’s gold.

I’m a morning writer. Sometimes my morning doesn’t stop until about two in the afternoon, but once I pause for lunch, I’m done!

What are some of your favourite romantic films/tv shows? Any recommendations?

I’m always up for a Hallmark Christmas movie, but my favourites include Enchanted April, Love Actually, Sleepless in Seattle, As Good As It Gets, Legally Blonde, Runaway Bride, 50 First Dates, While You Were Sleeping … How long have you got! 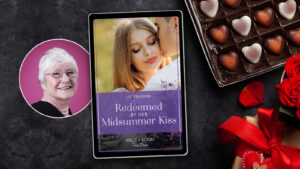 Redeemed by Her Midsummer Kiss by Liz Fielding

Can she melt his frozen heart?

Honeysuckle Rose finds much-needed solace in her great-aunt’s country garden. But her peace is threatened by brooding neighbour, ex high-flying news reporter, Lucien Grey. He’s returned from the front line a changed man. But can one unexpected, magical midsummer kiss be the beginning of a fresh start for them both…?

Read now in eBook or in paperback which also features One Week in Venice with the CEO by Kate Hardy!