The wonderful Virginia Heath joins us on our blog to talk about her brand new Regency romance, How to Woo a Wallflower.

Virginia tells us about her inspiration behind her new novel, writing rakish heroes in need of saving and the resilient heroines who are not afraid to take action.

I’m a huge fan of series. I love to see glimpses of the beloved characters from a book again in another, and I adore it most of all when the series revolves around family. That is why I jumped at the chance to work with my fellow Historical authors Millie Adams and Christine Merrill on the Society’s Most Scandalous series. I get the honour of kicking the trilogy off and introducing you to the powerful and aristocratic Fitzroy and Claremont families, rivals since time immemorial and uneasy neighbours in Mayfair’s swanky Berkeley Square.

If you’ve read one of my twenty plus Regencies for Mills & Boon, you will know that I love to write a strong heroine who does something meaningful with her life. I especially love a heroine who will roll her sleeves up to help someone in need irrespective of what consequences there are to her reputation or what might be printed about her in the scandal sheets – because frankly, behaving properly and finding the correct sort of man to marry as all genteel young ladies should, are the very last things on her long list of priorities.

Lady Harriet Fitzroy in How to Woo a Wallflower is such a heroine. All her priorities have shifted since a horrific riding accident almost killed her and left her with life-changing injuries that ensure she can never leave the wallflower chairs – even if she wanted to. But Hattie isn’t the oh woe is me sort. Nor is she the sort to settle for the sort of husband who would settle for the damaged daughter of a duke simply to climb the social ladder. Instead of wasting away her days embroidering in Mayfair, Hattie volunteers at the pioneering Ragamuffin Infirmary in the deprived environs of Covent Garden. There she encourages the forgotten children of the slums to get over their own life-changing injuries, because if she did it, then she firmly believes that they can. You see Hattie isn’t a victim, she’s a rescuer. Which is just as well, because the hero in this story is in dire need of being rescued.

Those that have read me before will also know that I am a firm believer in the heroine rescuing the hero. There is nothing sexier, in this author’s humble opinion, than a big, strong man who allows the woman of his heart to see all his vulnerabilities laid bare. On the surface, Jasper, the Earl of Beaufort, is a man who doesn’t give a damn what the world thinks of him. As the owner of the ton’s most talked about Gentleman’s Club, rumours about his rakish exploits make frequent appearances in the gossip columns. But as Hattie soon discovers when she wades in, sleeves rolled up, to help him deal with an unexpected but rather shocking change in his personal circumstances, like her there is so much more to Jasper than meets the eye.

As he publicly helps Hattie navigate her first Season stuck in the wallflower chairs, behind the scenes she’s helping him with something much more important. As rumors swirl about the pair in the scandal sheets and the chemistry between them sparks into passion, Hattie’s over-protective brother Freddie intervenes (you can read all about his scandalous love story in— A Kiss to Spark a Scandal – the online free read to introduce this series, available here on the Mills & Boon website. Obviously, as you would expect from me, all manner of shenanigans ensue, because the course of true love can never run smooth, and all of them make it into the scandal sheets.

But will Hattie and Jasper win the dubious honour of being crowned the year 1813’s ‘Society’s Most Scandalous’? You will have to also read How to Cheat the Marriage Mart by Millie Adams and How to Survive a Scandal by Christine Merrill to find out! 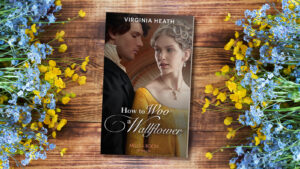 How to Woo a Wallflower by Virginia Heath

Jasper, the Earl of Beaufort hasn’t seen Lady Harriet Fitzroy since her serious riding accident. She has grown into a kind, spirited woman, whose sinful smile plays havoc with his jaded emotions! Hattie’s family disapprove of Jasper’s rakish past, but when she risks her reputation to help him the least he can do is pull her from the wallflower chairs and out of the shadows…