Have you ever wondered where our historical authors get their inspiration from? Joanna Johnson tells us about how a day trip with her husband unexpectedly inspired her new book, The Return of Her Long-Lost Husband.

In early January 2020, shortly before the world imploded, my husband and I went down to visit Portsmouth’s historic dockyard. I wanted to have a poke about on HMS Victory and see Henry VIII’s Mary Rose, and to be honest I wasn’t really thinking of gathering inspiration for a new book. Both ships were fascinating and we spent most of our day exploring them, only dipping into some of the other exhibits on our way back to the car… which is where the idea for The Return of Her Long-Lost Husband caught me unawares!

Among a series of boards describing various past naval triumphs was one concerning the 1816 Bombardment of Algiers, a skirmish I’d never heard of. A fleet of British and Dutch ships was sent to rescue European captives being kept as slaves, kidnapped by Barbary pirates from merchant ships and coastal villages and taken to Algiers. Although the mission wasn’t a total success – slavery persisted in the area until the French invasion of 1830 – over 3,000 captives were freed and presumably returned to their homes after months or perhaps even years of absence. The experience must have been overwhelming not only for the former captive but for their families too, having to readjust to each other after such a long time apart, and I began to wonder: for every happy homecoming, had there been one or two where the reunion wasn’t quite as sweet?

As soon as the question popped up I knew I wanted to answer it; and so Hester and Nathaniel Honeywell began to take shape. After Nathaniel’s ship is lost at sea and he is presumed dead Hester embraces widowhood, her unhappy marriage something she’d much rather forget. Life with her cold, ambitious husband was almost unbearable and she blossoms once out from under his shadow, something I imagined many women of the Regency period would have understood all too well. Women had little agency and wives arguably even less, the husband having the final say in all matters from finances to children, and it’s entirely possible some wives weren’t altogether heartbroken when their husbands disappeared. That taste of freedom would have been difficult to give up once the head of the household returned – as Hester finds out and Nathaniel soon realises, his homecoming not exactly the open-armed welcome he’d been expecting…

I hope you’ll read The Return of Her Long-Lost Husband to find out what happens next between Hester and Nathaniel Honeywell. Researching this story was so interesting and I’d love to share a perhaps lesser-known piece of British naval history – with, of course, a romantic twist! 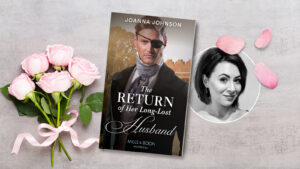 The Return of Her Long-Lost Husband by Joanna Johnson

A second chance at love?

Nathaniel Honeywell returns from being presumed dead expecting to be welcomed home with open arms, but is shocked when his wife, Hester, isn’t pleased to see him! Nathaniel can’t blame Hester for believing he abandoned her when she needed him most. During their marriage he’d foolishly valued money over his wife. But his experiences have left him a changed man, and as the simmering attraction between them grows, Nathaniel is determined to prove it!