Jenni: A lot of things that we associate with Christmas – trees, cards, crackers, Ebenezer Scrooge – date from the Victorian era so there’s just such a strong association. It’s like the most festive period of history! Elisabeth and I also both started off as Medieval writers, but then moved on to Victorians so we have a lot of shared interests.

So do the stories live up to the title? Will there really be snow and proposals?

Elisabeth: Mine is set during a snowstorm with Anthony getting stranded in his house with ex-flame Amy. So yes, lots and lots of snow. As for proposals – read it to find out…

Jenni: Yes and yes! Mine also has quite a bit to do with whiskey, which involved some selfless and committed research.

What makes these characters special to you?

Elisabeth: There aren’t enough older couples in my opinion. Amy and Anthony are just turning forty when the book starts (which makes them a few years younger than me). They’re starting to notice their aging- Anthony is going a little grey and developing a bit of a belly, Amy needs to squint to thread a needle. They have both been hurt, both recovered, both married other people, and both been widowed.  They aren’t starry eyed in the flush of youth.

Jenni: Angus and Fiona were so fun to write. They have a lot in common – they’re both stubborn and opinionated – so to begin with, all they do is butt heads and argue (I loved writing those scenes!) but they also both have good hearts and motives. Fortunately, that makes them perfect for each other and I really enjoyed that emotional journey.

Are there any traditions in your book you would love to try or have tried?

Elisabeth: Anthony inherits Windcross House from his Aunt Violet and her companion Alberta. While the ladies were alive they invited the villagers up to the house for carols, mulled wine and a roast pig by a torchlit bonfire after the Church Service. We have something similar here where people gather at a Victorian folly (a tower called White Nancy) around lunchtime and the local brass band plays. It’s a fantastic atmosphere and I wanted to recreate it in the book as best as I could

Elisabeth: Amy takes Anthony skating on the frozen pond. I like the playfulness that turns into something else and it amused me to describe the fountain.

Anthony gave an experimental kick, swayed and somehow managed to edge forward. He gripped onto Amy’s outstretched hands, closing his fingers tightly around hers. She squeezed back and though they were both wearing gloves, and not even an inch of bare flesh had touched, it sent a frisson of longing coursing through him. Her eyes widened and he realised he was not alone in feeling the pull of desire.

‘That’s right,’ she said. ‘The more you do it, the easier it will become. Try to go from one side to the other. You can hold the fountain if you find yourself stuck midway.’

Anthony regarded the fountain sceptically. The basin was in the shape of a conch held by a rather pert young woman who seem to be struggling to keep a toga on, revealing rounded buttocks and the hint of breasts.

‘Which bit exactly do you propose I cling on to?’

Amy’s answer was a deep-throated chuckle that sent sparks flying over Anthony’s scalp and down his neck.

‘I’ll go first,’ she said. She moved with grace over the ice. Anthony watched her go, again transfixed by the way her hips swayed from side to side. Every woman should skate to look her best, he decided.

He edged his way across the ice, ignoring the indecent nymph and instead focusing on reaching Amy. She was waiting with arms open in case he fell. Though he had found his balance, Anthony took the opportunity to take her around the waist and draw her to him. She reached her hands to his shoulders.

‘Is that how you would have held the fountain?’ she asked, grinning wickedly.

‘It seemed a waste when you were so close,’ he murmured.

Jenni: This is a scene where Angus is apologising (yet again) for some bad behaviour:

He held out the tumbler. ‘I’ve brought a peace offering.’

‘Not just any whisky. Meggie’s.’

‘Oh… Thank you.’ She took the glass from his fingers, regarding the contents suspiciously for almost half a minute before taking a tentative sip. ‘Eurgh!’ She started spluttering almost at once. ‘It’s… I can’t… I’m sorry, Mr Drummond, but it’s foul!’

‘What?’ He reached for the tumbler, frankly alarmed by the disgusted expression on her face, and took a large mouthful himself, letting it rest on his tongue for a few seconds before swallowing. The amber-coloured liquid trickled its way slowly down his throat, rich, smooth and fiery. Perfect.”

“I really am sorry.’ Miss MacKay had finally stopped coughing enough to look sympathetic. ‘I’m not just being mean in retaliation. I wish that it tasted better. Truly.’ She frowned. ‘Why are you laughing?’

‘Because it’s meant to taste like that!’ He gave a whoop of triumph, dropping the tumbler onto a bureau on the landing before catching her up in his arms and swinging her enthusiastically around in a circle, feeling relieved and vindicated and as if his heart were soaring. ‘It’s everything that I hoped it would be. Peaty, smoky and deep… There are so many layers. You can taste the land!’

‘And that’s a good thing?’ She started to laugh, too. ‘Well, thank goodness!’

He whirled them to a halt, belatedly realising that picking up house guests and twirling them around in their nightclothes, even in celebration, was yet another example of ungentlemanly behaviour. Quickly, he lowered her back to her feet, though there was no disguising the fact that his hands were still wrapped around her un-corseted waist, and that they were standing substantially closer than decency allowed—so close that their cheeks were actually pressed together…” 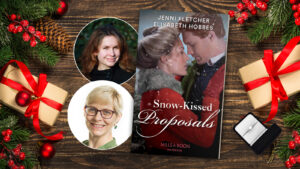