I am so excited for all the fans of Sweet Magnolias on Netflix in the UK to be introduced to Helen’s story in the new edition of Feels Like Family, which is timed to the season 2 return of the series on February 4.

These days so many young women are faced with the choice between career ambitions and starting a family. Like Helen, in this third book in the Sweet Magnolias series, some will become wildly successful, then belatedly realize that it might be too late for motherhood. I think that’s what makes Helen’s story so relatable. Just about everyone in Serenity depends on her skills as a lawyer and her generous friendship, but that can’t substitute for her emotional longing for children with all of the joys and messy complications they could bring into her life.

I hope as you share Helen’s journey in the book and in the Netflix series, you’ll feel the depth of her yearning, the very emotional ups and downs she faces and the strength she gains from the support of her best friends. That last, of course, is what Sweet Magnolias is all about, friendships among women. I hope each of you have strong, supportive women like Maddie, Dana Sue and Helen in your life. It’s an incomparable gift! 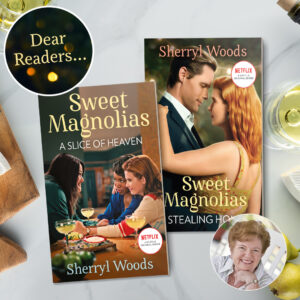 Maddie Townsend might live in a town called Serenity, but there’s been nothing calm or peaceful about her life since her marriage broke up.

This stay-at-home mum has no job skills, an out-of-control sixteen-year-old son, a talkative fourteen-year-old who’s suddenly gone silent, a six-year-old daughter whose heart is broken, an ex-husband whose younger girlfriend is expecting their baby and two best friends who think she’s somehow qualified to help them open a fitness spa for women.

But this is nothing compared to the chaos that ensues when she discovers that her son’s sports coach has feelings for her and the whole town disapproves. Maddie’s faced a lot of challenges lately with strength and resolve, but Cal Maddox may turn out to be more than she can handle. Then again, he could just be the one man who can help her find serenity.