We caught up with Modern author Lucy King to discuss her new book, A Scandal Made in London. Read on to find out more about the inspiration behind the book, as well as Lucy’s journey to becoming a Mills & Boon author!

What was the inspiration behind your new book, A Scandal Made in London?

From what I recall (and I started this book a while back!) it all began with an article I read in the papers about women who sell their virginity online. I found myself thinking, what sort of a woman would do that, and why? My heroine became a six-foot reluctant virgin, with rock bottom self-esteem and massive money worries, and the hero turned out to be the man who comes to her rescue – in more ways than one!

If you could/wanted to turn the book into a movie, who would you cast?

Oooh, this is a tricky one since I don’t have much of a mental image of what my characters look like when I write. But after a lot of thought and a tough hour or two spent scouring the internet for gorgeous tall men, I would cast Blake Lively (five foot ten) as Kate and Josh Duhamel (six foot four) as Theo.

In fiction it’s someone who’s tall, dark and handsome and you know would do anything for the heroine, albeit perhaps unwillingly. In real life (not very excitingly!), it’s someone who’s kind and generous, who switches on the electric blanket so my side of the bed is nice and toasty before I get in it or takes the kids off for the day so I can write.

When I first put finger to keyboard, I didn’t have a burning ambition to be a writer. What I wanted to do was write a romance for Mills & Boon. How hard could it be? I naively thought! I wrote a couple of stories that were truly awful and duly came back with a rejection slip, but by that point I was hooked. I joined the RNA and learned as much as I could about characters, conflict, emotion and story telling. Then came the Feel the Heat competition in 2008, which I entered and won with what ultimately became Bought: Damsel in Distress. Despite now calling myself a writer, most days I still feel I have no idea what I’m doing!

Read lots. Finish the book you’re working on. Take on board advice and feedback from people who know what they’re talking about. Don’t give up. Join the RNA.

A month or so ago, I would say reading, swimming and seeing friends. Now, thanks to COVID-19, I’m going to supervising the home education of a 9 and 7 year old for the foreseeable future and devouring box sets. Reading is sacrosanct, though! 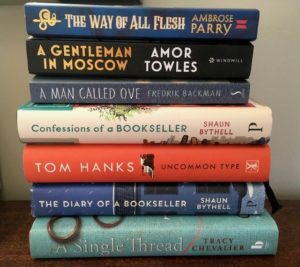 It’s probably easiest to show you a picture…

I’ve just finished Machines Like Me by Ian McEwan for my book club and am about to embark on A Man called Ove about which I’ve heard great things. I’m also half way through The Way of All Flesh, which I really must finish. And then there are all the regency romances on my Kindle, which are my catnip. Good thing I’ve now got plenty of time to fill…

Finally, can you give us a hint about what you’re working on next?

I’m currently half way through a story about a very competent woman who thrives on routine and structure, only to have her life thrown upside down when she gives birth to a baby she hadn’t even realised she was carrying. The hero, who is the baby’s father, isn’t doing too well either. He’s recently discovered he was adopted and is now suffering from a huge identity crisis. There are a LOT of issues to overcome before they reach their HEA, but they’ll get there. (I hope…!)

Get your copy of A Scandal Made in London by Lucy King here!