We caught up with the wonderful Louise Allen who writes Historical romances set in the Regency period. Her novels always feature a twist of humour and plenty of passion, with characters who aren’t afraid to stand up for themselves.

Read our exclusive Q&A below…

First of all, congratulations for winning the Romantic Novelists’ Association Shorter Romantic Novel Award for your Regency Romance, A Proposal to Risk their Friendship! How did it feel to win this award?

It was a huge thrill and a complete surprise. I genuinely didn’t expect to win and hadn’t prepared a thing to say – and then almost dropped the Award itself, which is heavy! In a way it was a good thing – I didn’t have any nerves waiting for the announcement. I have won twice before and it is always such a lovely, warm feeling to know that something I’ve written has resonated that much with readers.

How would you describe your writing journey?

A slow build is probably the way to describe it. I began writing jointly with a friend, as Francesca Shaw. We couldn’t seem to get it quite right writing contemporary novels, then had a brainwave, tried Historical and found our niche. We wrote eight books together, then my partner moved to the other end of the country for work and I found myself nervously embarking on a solo career, finding that my ‘voice’ as Louise  was different, which was a worry until I got used to it! I wanted to give up the day job, but I knew I’d need a good backlist behind me to do that and had to manage a thousand words a day on top of a full-time job and a commute for several years. It was a huge luxury to be able to “retire” and devote myself to writing.

If you could give your younger self three key pieces of writing advice, what would they be?

You can’t edit what isn’t there, so get something, anything, down on the page.

Learn to recognise constructive criticism and consider it carefully, even if you don’t agree with it.

There isn’t any one “right” way to write, there’s only the way that works for you.

What do you enjoy most about writing historical romances?

The challenge of finding an emotional story that a modern reader can identify with and yet which is true to the period – and, of course, the research, that bottomless rabbit hole of fascination. I especially love it when it involves travel.

What’s the first thing you create when you start a new novel, the characters or the setting?

It varies. I am definitely not a plotter – knowing what happens spoils the fun for me. I might start with a character, or a place or a “what if?”, sometimes all three, but I very rarely have both hero and heroine and a location and a situation all at once.  I once had my hero (no name, no background) dangling off a castle wall on the end of a rope. Why? Where? I had no idea and he had to stay there, lurking in my subconscious, for at least one other book until I realised who he was and what he was doing.

He must have a sense of humour, although it can be well-buried, he must have a generosity of spirit and he must be tall. I am not particular about hair colour, but I do have a weakness for grey eyes.

Can you tell us about your new novel, The Earl’s Mysterious Lady?

When Viola was barely out of the schoolroom she jilted Guy Thurlow, a bridegroom she barely knew, at the altar. Now she has a new name, a new identity and a new life – and into it walks Guy, now Earl of Easton, who doesn’t recognise this confident woman as the plump, shy girl who left him at the church. She knows she is falling in love with him, and suspects that his feelings are engaged too – but how can she tell him who she really is?

Oh, definitely flowers – they last so much longer! 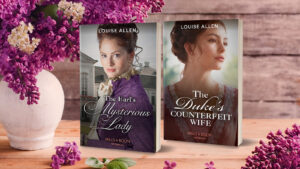 Viola fled her arranged marriage to Guy Thurlow, Earl of Easton, right at the altar steps. Now, she is Cressida Williams and greatly changed – so much so that when Guy finds her trespassing on his neglected estate, he doesn’t recognise his runaway bride. Working together to restore his grounds, desire flares. But she must deny his temptation because it would be socially ruinous if he discovers who she really is…