Has writing always been your passion?

It has, I always made stories up as a kid and I have notebooks full of stories from a very early age. They usually star my family and my friends and there was always an adventure side to them. I remember one where it was with my friends and we used to have to plough through the snow on sledges to get back to a cabin. Not so romantic at that age. But then I left writing when I started teaching and just didn’t have time, it was always on the side-line. So, when my kids were young and my husband was working away, I had evenings to myself and I just decided there was no way I was going to just sit and watch TV. I thought I’d start writing. A few friends from a baby group online were having a conversation saying ‘Ahh we know Mills & Boon, we used to read them. How hard could it be to write one. So, we said we’ll try, and I think I was the only one who actually continued. And then when I entered it in the competition it wasn’t quite right, and I realised it’s actually quite hard and that there’s more to it than people think. People say it’s really easy you can bang them out but there’s a lot more craft and skill. So, it’s really nice to be able to do it and now I can legitimately say I’m going to go off for an hour and do some writing and no housework.

What are your writing rituals?

Tuesday is my writing day as that’s the only day I don’t teach, so I go to the library and make sure my phone stays in my bag. I deliberately don’t log on to the WIFI there so I just have to write.

I’m getting a writing room – we’ve done a big house renovation, and it’s been a marathon thing but we now have a loft extension and I’m actually getting what was my daughter’s bedroom, which will be my writing room. It’s going to be peacock themed and have all my books and research and notebooks and it’s going to be the tidiest room in the house. That’ll be really nice.

I try to grab five minutes here and there and have a notebook in my bag. I have pulled aside in my car a few times and made a few notes on my phone to remind myself of things.

Can you tell us a bit about Beguiled by the Forbidden Knight?

It is set just after the Norman conquest. I’d already written The Saxon Outlaw’s Revenge which had a Saxon hero and a Norman heroine and so obviously, the politics of that for him was very emotional so I wanted to see what it would be like if the allegiances were switched around. Then I decided I wanted to play around a bit with disguise – I’ve always loved the Shakespearean things and having characters in disguise and at first I had this idea that he was going to have to go and get this bride and I was going to have her in disguise and him actually being who he said he was when he turned up and then I thought, wouldn’t it be more fun if they were both in disguise? So, they both had a reason not to be able to be together and originally I was going to have them both be disguised as servants and thought it would be more interesting if they were both playing noble roles. I think the cover for the book is great. It’s the one that so many people say wow, that’s really stunning.

Where did you get your inspiration from for Beguiled by the Forbidden Knight?

It followed on from the idea of switching around and I wanted to set another book in Yorkshire aswell. I was watching Mad Max and I was thinking that the idea of going through a post-apocalyptic world and thinking about the time, that’s what it must have seemed like for people as Yorkshire was really badly treated and destroyed. I thought it would be interesting to see what it was like having the heroine forced to marry the conqueror. Since the Brexit vote, there’s been a lot of ‘This is our country. This is us’ and I thought actually when you look back through history, how many people can say ‘We are English.’ I thought it would be interesting to play around with the notion of what is English.

What the best advice you’ve ever been given when it comes to writing romance?

When writing romance, it helps to write when you’re drunk and edit when you’re sober especially when you’re writing a steamy scene. It helps. It also helps to have an empty house. The main thing is to just keep writing. If you write 500 words a day, it will add up quickly. Get little bits done here and there. I actually say to kids at school when they say they don’t know what to write, I say ‘write something’ because you can’t edit nothing, so when you’ve got something it might be rubbish and you might have to throw half of it away but at least you’ve got something. It’s all about Little and often.

What’s your favourite thing about writing in the historical romance genre?

I love taking a modern idea and twisting it with historical things for example with A Wager for the Widow, it was a workplace romance and it was about getting the boss’s daughter, except the boss was a medieval nobleman. He was the household steward. I like the medieval period because it is so different. If you imagine being put back in a medieval village, you wouldn’t know what to do or what that was like. I grew up on watching Robin Hood and Lady Hawk and that’s what imprinted on me early. You get the excitement of sword fights too.

What would you say to readers who haven’t read a historical romance?

If you’ve never tried a Historical Romance or don’t think they’re for you, give one a go. The clothes and settings might be strange but love is timeless and the emotional highs and lows characters’ feel are just the same.

What is your favourite romance book of all time?

Persuasion. I think it is such a wonderful book. I love the reunion and the second chance trope and I really like the letter Captain Wentworth writes to her at the end.

Finally, what can your readers expect next?

I’m currently writing my book that’s a part of The Scottish Continuity, The Lochmore Legacy. Mine is the 3rd book, A runaway bride for the Highlander, it’s set in the Tudor period. It’s part of a continuity and it goes back through the four periods. It starts in Victorian, then regency, then Tudor and ends in Medieval.

It’s just after the battle of Flodden and the hero has become an earl when his father dies. The  heroine is a rich French woman who is betrothed to one of his sworn enemies from a different clan. It’s a runaway bride story. The theme throughout the whole continuity is the Scottish castle and the mystery that becomes uncovered as you go back in time. There are a lot of skeletons in closets!

It’s really lovely as the four of us writers are part of The Unlaced Historical Romance Group. It’s been lovely to work together, it’s so nice working with friends. It’s exciting as we’ve collaborated together and there are key things that tie the books together so we’ve had a chance to read snippets of each other’s books. I’m really excited to read all the books when they’re published!

Beguiled by the Forbidden Knight  is out Now! Keep your eyes peeled for The Lochmore Legacy series coming soon… 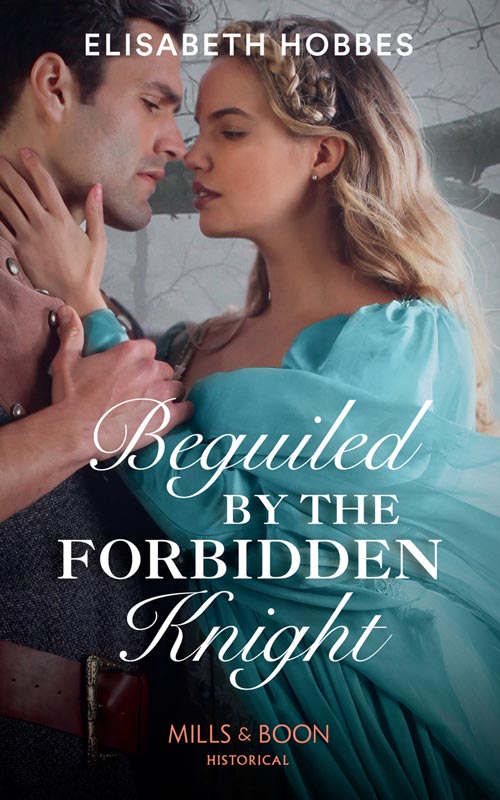