We caught up with lovely Modern romance author Heidi Rice to talk about her new book, Banished Prince to Desert Boss, her journey in becoming an author and her writing advice!

You write for the Mills and Boon Modern series, which whisks readers away to a world of glamour and luxury with lots of sexy, seductive and very alpha heroes.

No laundry! Or any other household chores… Seriously though, first and foremost it’s the absolute escapism Modern Romance represents and all those intense emotions! During the first lockdown I was literally escaping into a world where the pandemic did not exist – but lots of really gorgeous men did… And that was some powerful mojo for me when I was panicking about practically everything (except toilet rolls, seriously what is that even about!?) I adore creating those to-die-for larger-than-life, alpha heroes. And the smart savvy alpha heroines who are going to make them fall in love… All the armchair travel has also come in very useful in the last two years, not gonna lie.

Can you tell us a bit about how you started writing for Mills & Boon?

I loved reading romance as a teenager, but then kind of drifted away from it in my twenties. I got back into it though when I had small children and could only read books in small bursts which had to draw me into the story instantly… Because I’d probably only have five minutes before some crisis was looming – my boys were both what you’d call high maintenance aka hoodlums! As a result, I learned to love the high intensity, fast paced reads M&B excel at and then I decided I wanted to write it. I then took about four years writing my first book (did I mention my kids were hard work?). It was rejected, but by then I had the bit between my teeth and the next one only took a couple of years to finish and that one got accepted for M&B’s Modern Extra line! When they told me I had to write the next one in six months, I decided my boys were on their own…

What was the inspiration behind your new book, Banished Prince to Desert Boss?

Banished Prince is the fourth book in a series of linked books which revolve around a family of desert kings called The Khans. Basically my hero in this book, Dane Jones (he uses his mother’s name after his parents divorced and his father disowned him) appeared in the prologue of my previous book in the series, Innocent’s Desert Wedding Contract, taking the mickey out of his half brother, the hero Karim. I adored Dane right from the get-go, he’s a bad boy – which is one of my favourite hero archetypes –  a self-made US nightclub entrepreneur who hasn’t returned to his father’s desert kingdom since he was five years old. But he’s always been loyal to the current sheikh Karim … When he appeared in Karim and Orla’s story, I thought – hmm, he’s really hot, and clearly has lots of hidden issues with his heritage which he hides behind a cocky, devil-may-care façade, I totally need to give him his own story. Then also in that story, up popped Jamilla Omar Roussel, the brave, scarily efficient and slightly uptight personal assistant to the heroine, Karim’s new Queen Orla… And frankly, when she appeared I knew I had to introduce her to Dane! Because he would be her worse nightmare, then I decided what would make her his worse nightmare too…? I know, forcing him to stand in for Karim and Orla at the last minute on a European trade tour, and making Jamilla his chief diplomatic aide, in charge of trying to turn him into a desert prince, a role he despises, while also turning him inside out with lust… And voila, this book was born.

How did you turn your dream of being an author into reality?

Lots and lots of writing, lots and lots of re-writing, and lots of getting feedback from people who knew what they were talking about (ie: not my mum! Who was very sweet and complementary about my work, but would slip in comments like ‘I think you’ve used the word “erection” too often in that story’ LOL!)

Modern romances often take place in diverse, international settings. What is your favourite setting to write about?

Wow, so so many… I enjoy writing about places I love and know really well because I have family there, or I’ve visited often… Such as London (my home town), Ireland, Paris, New York, the Cote D’Azur, Tuscany, etc. But I’ve also enjoyed branching out and doing some armchair travel of my own (which I call research!). In the last few years I’ve had the chance to spend hours trawling blogs, Pinterest Boards and YouTube videos of Bermuda, the Bahamas, and a selection of desert kingdoms and winter wonderlands, so I can invent my own fictional ones…

When I’m doing the first draft of a story, I work out a word-count plan on pacemaker.press and then I try to stick to it. That usually means writing around 2k words a day. Once those words are done,  I give myself permission to clock off, go for a walk, do laundry, watch TV, do admin or social media marketing….  But if I’m really on a roll I might stick with it – I hate household chores so sometimes ever when the book is driving me nuts, I will stick with it!

What’s the best piece of writing advice you’ve ever received?

I love Nora Roberts ‘you can’t edit a blank page’ – which I feel totally gives me permission to write rubbish, on the understanding that anything can be fixed (especially if you have an amazing M&B editor to help you, like I do).

What are some of your favourite romantic films/tv shows? Any recommendations?

My favourite romantic movie is a little 2004 film set in Scotland called Dear Frankie, with Gerard Butler and Emily Mortimer, directed by Shona Auerbach. If you haven’t seen it, you should. It’s heart-meltingly sweet but also surprisingly gritty. Mortimer is a single mother who for years has been sending her son letters from his ‘father’, creating this whole fantasy that his father is a merchant seaman. But then she has to find a real guy to pretend to be him for a weekend when her son finds out his father’s ‘ship’ is docking for the weekend in their local harbour. Enter Gerard Butler – gruff, handsome, but also surprisingly intuitive… Seriously , it’s a wonderful movie. Check it out. For TV, is there anything other than Bridgerton? I hoovered up the first series (twice) and fell madly in lust with Regé-Jean Page (didn’t everyone?) but I’m preparing to switch my allegiances now to Jonathan Bailey’s Anthony. I also think Simone Ashley is going to be terrific as Kate Sharma. Season 2 cannot start soon enough for me.

So-so many books, too many really, luckily they’re all on my Kindle or my husband and I wouldn’t be able to get into our bedroom. But top of the pile atm is Tia Williams’s The Perfect Find, because Seven Days in June was my favourite book of 2021! Next up is the new Diana Gabaldon Outlander book Go Tell the Bees That I Am Gone.

Chocolate… Seriously, is it even a question? 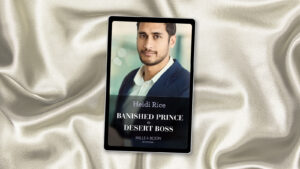 Exiled prince Dane’s declaration that he’ll only attend an important royal ball with her as his date sends by-the-book diplomatic aide Jamilla’s pulse skyrocketing. Ignoring protocol for once feels amazing, until their stolen moment of freedom becomes a sizzling scandal…

Read now in eBook or in paperback which also features Hired by the Forbidden Italian by Cathy Williams.

Cooking up a Storm… why enemies to lovers is so fun to write (and read)!