To celebrate National Kissing Day we’ve asked our authors who their top book crushes are! Who’s your favourite? 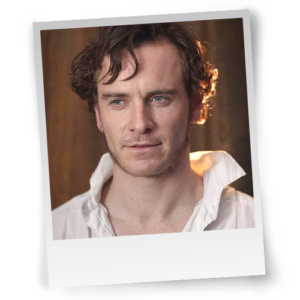 He’s not a great husband. He’s not even particularly nice. Okay, he’s self-centred, often childish and occasionally cruel, but he’s also dark, moody and mysterious and you don’t get over your first book crush in a hurry – especially when he’s from Yorkshire too!

I fell in love with Ruark on the first few pages. By the time he truly kissed Shanna he was kissing me. I re-read very few books but this one I’ve read a number of times. Ruark still gives me butterflies.

Siry Percy Blakeney made my pre-teen heart beat that much  faster and made me want to read  more books like that. Principled action hero in disguise as a fop  and secretly hopelessly devoted to  his head-strong wife in a historical romance. What isn’t there to love?

Persuasion is my favourite Austen novel – largely in part owing to this tremendous hero. Wentworth is honourable, dutiful, brave and financially assured (ahem) but he has a blindspot where his ex inamorata Anne Elliot is concerned. He’s broody, beautiful and ultimately loyal. Hand me my smelling salts…!

Jondalar in The Valley of the Horses

My top book crush is definitely Jondalar. The fur-clad, spear-wielding, Paleolithic hunk captured my heart with his sweet, soulful love of heroine Ayla. He was simply the only man on the glacier-covered earth who would ever be good enough for her!

Dark, damaged, brooding, totally alpha, and so delicious I swoon just thinking about him. At one point when the heroine is in danger he uses the FBI’s “secret key” to get to her. I won’t ruin the surprise as to what that is but you’ll remember it when you read it! Now if only there was a way to make him real…. 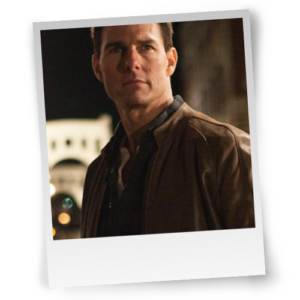 I have so many book crushes it’s hard to choose a favourite, but if pushed I’d go for Jack Reacher. Strong, smart, practical (I know, a bit of a strange quality to love, but it does it for me!) and most impressively, he’s completely fearless in the face of danger.

Even though it’s an old book that I first read as a teenager, I still reread it occasionally. Told in only the heroine’s first person perspective, he came completely alive for me as a super-sexy hero who we finally see has his own vulnerabilities. *Swoon*

I’ve had so many book crushes over the years that it feels almost sacrilegious to pick one! So I think I’m going to stick to my most recent book crush – Gideon Cross. He was pivotal in fuelling my love for the more…aggressive alpha hero if you like. His single-minded pursuit of the woman he fell head over heels in love with at first sight, despite the numerous and seemingly insurmountable obstacles in their way hooked me deep from the moment he stepped onto the page. And yes, it could be that I also have a weakness for vulnerable billionaires! So much so I’ve written a few of my own! Long live the super angsty, possessive, vulnerable but oh-so-irresistible alphas who rule our book lives!

In the old West, Jesse DuFrayne, suspected train robber, is nursed back to health by a spinster who lives a strict life.  If my tattered and yellowed copy of Hummingbird ever fails me—I have a second copy. Jesse will always be rugged and having the re-grown mustache Miss Abigail trimmed too closely while he slept.

Captain Harry Fanton in Waltzing with the Earl

I love wounded, tortured heroes (aren’t I mean?) who mask their wounds and only reveal themselves as they learn to trust and love. That is why I adored Captain Harry Fanton. Gorgeous, flirty and humorous on the surface, but battling his pain beneath. And the kiss in the carriage scene was the perfect combination of moving and sexy. Just perfect! 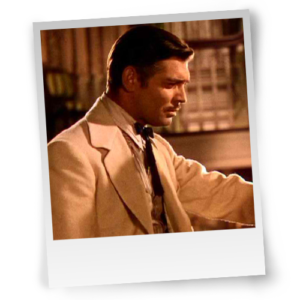 Rhett Butler in Gone with the Wind

I have always had a soft spot for Rhett Butler.  Rhett was such a great alpha character and Ashley Wilkes was far too vanilla for me. And then Janet Evanovich gave me two choices in her Stephanie Plum series – Ranger and Joe Morelli. The twenty-year-old me would have picked Ranger but fast forward two decades and Joe Morelli would be my pick.

Zane in An Outlaw to Protect Her

I love Zane from Harper St. George’s upcoming book. I was lucky enough to read a sneak peek and can’t wait for more. Zane is an outlaw who’s been hired to protect the heroine from her past. He’s the classic brooding hero with a secretly soft heart who has been infatuated with Glory since the beginning of the series. He might be rough on the outside, but he has a sensitive soul and the heart of a true gentleman. When he senses things are moving too fast for Glory, he actually asks permission before kissing her! I can’t wait to read more about this sexy gunslinger.

Gui in Beguiled by the Forbidden Knight

He’s a tough Norman archer who suffers with PTSD while fighting to keep the heroine safe. He is truly honorable and resists his attraction to Aelfhild because he believes she’s betrothed to his friend, so when he finally kisses her it’s incredibly hot. Also he likes swimming naked in the river when he thinks no one is watching! 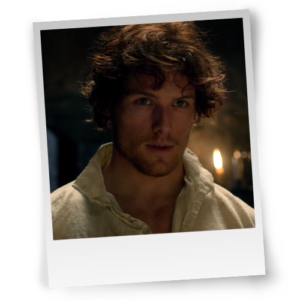 My Top Book Crush is Jamie Fraser… Or as he’s formerly know James Alexander Mackenzie Fraser –  from Diana Gabaldon’s epic time-slip romantic adventure series, Outlander. Ah  Jamie, my Jamie. When I picked up the first Outlander book I would never have believed this guy would become my Top Book Crush – even though he is an 18th century highland rebel (yup, we’re talking kilts and broadswords, people). He’s ginger, he’s a virgin, he’s only in his twenties and in one scene he even spanks the heroine (and not in a sexy way!)  In many ways, he’s the opposite of an alpha hero but with so many alpha qualities. He’s a man of his time but with a seeking, sensitive personality that means he transcends time and makes him the perfect match for Gabaldon’s smart, spirited, indomitable heroine, Claire Beauchamp – who, btw, is my Top Girl Crush, just in case you were wondering.

No other book hero can even be a close second. There is Rhett Butler…but still, it’s Jamie.

He leaps off the page in all his kilted glory and I can’t get enough! 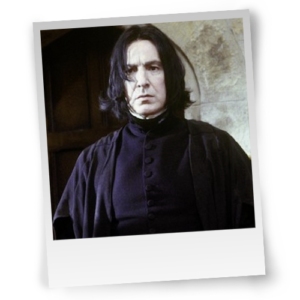 All that tortured, anguished broken hearted, brooding intensity just makes for one of the most intense underexplored romantic heroes of all time. Oh to be the focus of such a devoted love that gave way to one of the greatest sacrifices in the HP world. My Petronus would be a doe!

The ‘bad boy’ with a deeply flawed heart of gold thing. I mean…no one’s that evil. Right?

Roarke in J.D.Robb’s In Death Series

Over the course of the forty plus In Death books by JD Robb, I have fallen in love with its hero, Roarke. Oh, who am I kidding? I’ve loved Roarke from the very beginning! He’s the perfect fantasy boyfriend – sexy, successful, strong, with a bad-boy vibe that could only work for me in books! 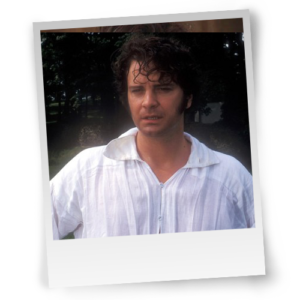 Mr Darcy in Pride and Prejudice

My first book boyfriend crush happened when I was almost fifteen. My mother gave me Pride and Prejudice to read. I started off saying, ‘this book is SO boring’ followed by ‘that horrible Mr Darcy!’  My mother said, keep reading. It didn’t take long for me to say, ‘Oh! Mr Darcy!’ and from that moment I was his and he was mine and I walked in Elizabeth’s shoes, desperately worried I’d lost him. But his love was real and he took me off to Pemberley. It’s a long time since I was 15 and there have been other book boyfriend crushes, but the first is always, special, right?

There was something intriguing about the granite stiffness and formality, especially when he awkwardly first attempts to articulate his feelings. “In vain have I struggled. It will not do. My feelings will not be repressed. You must allow me to tell you how ardently I admire and love you.” Those stilted words, or rather all the swirling, repressed emotions behind them, gave me a window into the Regency world I had never considered before and I fell head over heels in love with the man. Now, thanks to the brilliant BBC TV adaptation, I love him even more. I know everyone raves about the wet shirt scene. Hey! I’m human too, and certainly not immune to the sight of Colin Firth draped in translucent, dripping linen. However, it was not the scene which made me fall head over heels in love with the character. It was another. Miss Bennett is at Pemberley turning the music pages for Mr Darcy’s sister as she plays the piano. And he looks at her. He’s still so stiff you could turn him sideways and use him to saw wood, he’s still painfully formal and a little bit pompous, but nobody ever gazed at a woman with so much unrequited adoration and longing as Colin did at that precise moment. He took Jane Austen’s brilliant words and turned them into a beautifully poignant and quietly repressed moment of romantic perfection. Now, it’s Mr Firth’s voice I hear when I re-read the book and I confess, I imagine I am Lizzie as he speaks to her. However, for some peculiar reason, he’s always wearing that wet linen shirt….

He was handsome with his red hair, and as brave as any 15 year old boy could be. And, there was always something mysterious and adventurous about Jim, being the runaway who found a new life and a new family. He always had the answers and I’ll admit, I was a bit jealous of Trixie who seemed to be the one who captured his young heart. Never fear, though. As I grew older and moved on to Nancy Drew…yes, my next book crush as Ned Nickerson. Tall, handsome, athletic—my heart went pitty-pat for Nancy’s beau, as well.

I’m a sucker for a knight on horseback, even if he isn’t in Medieval times which is why I love Lara Temple’s Lord Hunter.  He’s an expert on horseback (like any good knight should be) and a rake with a heart of gold.  He’s so chivalrous he enters into a betrothal to protect a shy heiress but then finds he can’t resist her.  He knows how to handle himself in a fight- and a lady in a linen cupboard! 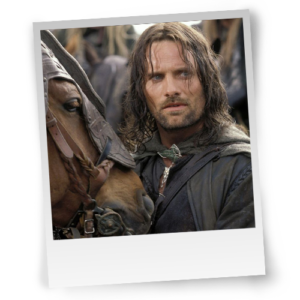 Aragorn in The Lord of the Rings

Nothing is sexier than a Warrior-Philosopher.  Which is why I have been in love with Aragorn from Lord of the Rings since 5th grade! He’s honorable and noble, and intelligent. He knows his history, he thinks about the world and he considers his obligations to the world seriously even as he keeps himself a part from that world.  He puts others before self. And there’s a very sexy purity to him that hints at the idea that love-making for him is a holy, transcendent act. He is saving himself for Arwen.

PS—here’s a little secret, readers. When I was ten I had Lord of the Ring bedsheets that featured all the characters on them. I loved those bed sheets. I had them forever.

My favourite book hero is Gilbert Blythe; he and Anne were made for each other even if Anne doesn’t recognise it straight away!  But in the end she realises true romance is about more than the stereotype and I know their happy ever after will last forever.