We’re all affected by our mothers, sometimes even more than we realise. In honour of Mother’s Day, we asked some of our authors how their mums shaped their own thoughts and actions. Don’t forget to head to our Facebook page to share your own #MumWisdom and be in with the chance to win books!

“My mom is a very determined woman.  I have never met a woman like her.  There is nothing she can’t do once she puts her mind to it, and whenever we visited her father’s California cattle ranch, she’d chase down one or more of the older horses, bridle and saddle them, and help us ride.  My mom had so much confidence that one Easter when we reached the ranch, the horses weren’t in the corral, but below the cattle crossing guard in a lower pasture.  Mom marched down to the pasture and  spent considerable time cornering a most unwilling brown horse, but she did it.

She got a lead on him, then bridled him, and saddled him, too.  And then finally, she put my toddler brother and me on “Sunny’s” back.  The horse was really unhappy, but my mom wasn’t having it, determined to show us kids how it was done.

We had just finished taking the picture you see when the neighboring rancher came careening up the road in his truck, upset because that wasn’t Sunny.  That brown horse wasn’t our horse at all, but a wild horse that wasn’t yet broken because he was so bad tempered.  Our neighbor couldn’t believe Mom had got a bridle and saddle on him–much less her baby boy.  But that’s my mom.  Don’t tell her something can’t be done!

We asked author Melanie Milburne what advice her mum gave her that she’s never forgotten:

“Today is a gift. You will never get it back if you waste it. I never realised the wisdom in those words until I was older and time poor!

When I was twelve, I found a horse in our top paddock after he escaped from his adult owner when she was having him shod. He was quite traumatised so I offered to school him for the owner who was having trouble handling him. But when she took him back he was still too much for her so she put him up for sale for a price my family couldn’t afford.

I thought Pal (I renamed him from the name of Icon) was going to end up at the knacker’s because the owner was so keen to get rid of him. When Mum said she’d paid for him it was a moment I will never forget. It made me a very optimistic and positive person as a result. Dreams do come true!

For many years I tried not to be like my mother because I made the mistake of only seeing the bad things. Mum wasn’t a tidy person and I’m a neat freak so it made for some interesting clashes! But as I’ve got busier I can see how hard it must have been for her to juggle everything. I can pay people to help me with domestic things, but she didn’t have that luxury.

Mum once organised to help a friend escape from a violent domestic situation. She organised accommodation, food, and transport-everything. I have always admired her for that. It was at a time when people used to turn a blind eye to that sort of thing.”

In 10 words or less, give us some motherly advice.

“This is from me, not my mother! Change places with someone else so you can see things from their point of view.”

Author Amanda Cinelli sent us the above photograph of her grandmother Anne, her mother Audrey, her and her daughter Zara. Four generations of strong women!

“The best piece of advice that my mother has ever given me is that it is ok to feel afraid of the unknown but it’s not ok to let your fears stand in the way of you doing what you’ve got to do. You might just go and do something amazing!”

Presents author Kate Walker has this to say about her late mother:

“This year’s Mother’s Day weekend has a special impact for me as it falls on the date when we would have celebrated my mother’s 100th birthday. We are going still going  to celebrate it actually. My sisters and I are meeting up on Saturday to share a dinner and to raise a toast to her memory.  This way we can follow the advice she left us in her final message to us – a note she wrote to all of us in what she knew were her final days. ‘You have been my joy all your lives,’ she wrote.  ‘I love you. Love one another.’

My greatest delight and my greatest sadness came together on the day that I received the letter (there wasn’t ‘the call’ back then!) to say that Mills & Boon were accepting my first novel, The Chalk Line, which was the same day as she was given a diagnosis of terminal cancer.  We had hoped that she would live long enough to read my first novel in print – she refused to read the typescript because she was holding on in order to be able to do that. Sadly, she didn’t quite manage it, but the doctors said that she lived much longer than they had ever anticipated. I like to think it was the thought of seeing my book that kept her going.

My mother taught me to read. She instilled in me a love of books and reading. Because of her there were always books available at home to feed the reading hunger she created. She also dreamed of being a writer herself and had several poems published in her early twenties. I have one hazy memory of her sitting at a writing desk we had in our Yorkshire home, writing away on what I thought were letters, but later, discovered that in fact she was working on some children’s stories. I don’t know what happened to those tales – which is such a pity as I think she would have been a magical story teller herself.

She also read aloud to us – often by a real coal fire so that we cold curl up beside her,  close our eyes, and see the pictures in the story inside our heads… Listening to those stories, concentrating solely  on what I was  hearing, focusing on the way characters behaved, the dialogue they spoke was the best possible training ground for learning how a novel worked on an instinctive and gut level.

I have no doubt that listening to those stories and then drifting off to sleep with them in my head, I took the first steps on the road to becoming the writer I am today, with a storytelling skill learned, literally, at my mother’s knee! I made up stories to myself, finished off the tales she hadn’t yet  brought to an end, imagined how the characters she had created or read about would have behaved. And I learned the basics of simple, straightforward story-telling , building up excitement, using dialogue as a result.”

Some great advice and motherly memories here! Don’t forget to share your own #MumWisdom over on our Facebook page to be in with the chance to win books! 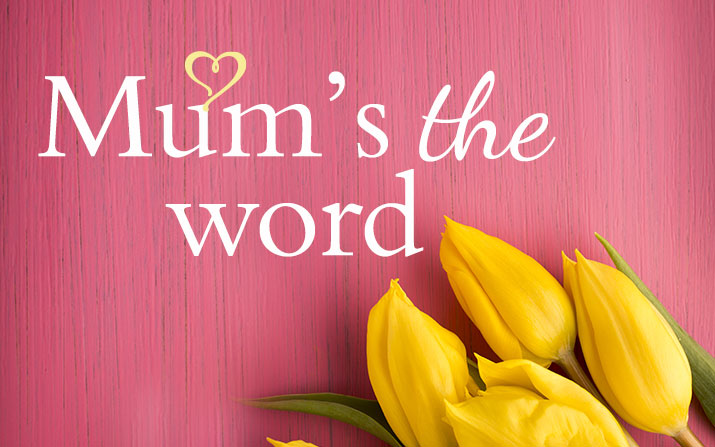