Read on to find out more about Michelle’s inspiration for The Iron Warrior Returns!

My children have always loved superheroes. Whether it’s Ironman, Spiderman, the Incredible Hulk, or even Geralt of Rivia, our family loves to root for the heroes. There’s something inspiring about a larger-than-life character who faces overwhelming odds and manages to overcome challenges.

I’ve written many book series for Mills and Boon, especially warriors. From my MacEgan Brothers Irish medieval series to the Forbidden Vikings series, I’ve always loved alpha men who fight for the women they love. My new Legendary Warriors is inspired by superheroes. The first book in the series is called The Iron Warrior Returns—and I think there’s a strong chance you can guess the hero who inspired that book.

Robert of Penrith is an intelligent medieval warrior who loves to take things apart and is fascinated by how things are built. Yet, he’s somewhat clueless that the miller’s daughter, Morwenna, has been in love with him for years. After being exiled from his homeland, Robert wants nothing more than to return to Penrith and fight for his birthright. Morwenna accompanies him on his quest, but she’s well aware that he has to marry the daughter of the new Earl of Penrith in order to win back his land. It breaks her heart when she watches Robert court the beautiful Lady Gwendoline, a highborn woman who later becomes her friend. Yet, Morwenna doesn’t know how to make Robert see her as more than a companion, much less fall in love with her.

Morwenna’s character was inspired by Eponine from Les Miserables. I’ve always sympathized with the waifish, poor heroine in love with a man she couldn’t have, and I wanted to give her a happy ending.

While in exile, Morwenna trained alongside Robert, learning to fight with a sword. Although she’s loved him for years, she knows that an Earl’s son will never marry someone like her, the daughter of a serf. But when Morwenna finds a gold pendant and a gown that her father saved for her, she discovers deeply buried family secrets that make her question who she truly is.

The Iron Warrior Returns is the story of redemption and finding love where you least expect it. I hope you’ll enjoy this super-hero-inspired story. Next, look for the second book in the Legendary Warriors series, tentatively titled The Savage Warrior Returns, which has elements of inspiration from a big green superhero with a challenging temper. Happy reading! 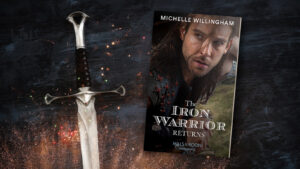 To regain his stolen lands and save his people from suffering, Robert of Penrith has returned to marry his enemy’s daughter. To Robert’s surprise, his dearest friend, Morwenna, helps him win the heiress’s hand—despite the danger to them both. The fierce, beautiful miller’s daughter has stood by him throughout his exile. But a single kiss ignites a passion that threatens to upend all Robert’s plans…

Jenni Fletcher on her Regency Belles of Bath series

I Got the Call! Meet New Author Lissa Morgan

I Got the Call! Meet New Author Sarah Rodi