We’re so delighted to share that Mills & Boon Historical author Lissa Morgan has been named as a contender for The Joan Hessayon Award for new writers.

The  Romantic Novelists’ Association (RNA) awards ceremony on will take place at 6.30pm on Saturday 16th July 2022 at Harper Adams University, Newport, Shropshire, as part of their annual RNA conference.

Dolgellau author, Lissa Morgan, is a contender for the Romantic Novelists’ Association’s (RNA) annual Joan Hessayon Award for 2022 with her novel, The Welsh Lord’s Convenient Bride. The award is for authors whose debut novels have gone through the RNA’s New Writers’ Scheme and are subsequently accepted for publication.

Lissa hails from Wales but has travelled widely over the years doing various jobs and indulging her love of history in her leisure time. She once combined the two and worked as a costume tour guide at Hampton Court Palace, where she donned her sumptuous Tudor gowns in Catherine of Aragon’s chambers! Now working in web design, Lissa lives in rugged north-west Wales surrounded by medieval castles that provide the perfect inspiration for her books.

She commented, ‘To be a contender for the Joan Hessayon Award is such an honour, especially coming after fifteen years of writing but never quite making it to publication. This book is very close to my heart and to have it recognised in such a wonderful way makes all those years of sticking at it and having faith in my story and in my characters even more rewarding.’

Melissa Oliver, the organiser of the Joan Hessayon Award (and winner of the award in 2020), added, ‘As a previous winner, I know first-hand that this prestigious award champions and recognises newly published authors who have graduated from the RNA’s fabulous New Writers’ Scheme. It’s a fantastic achievement and this year the depth and variety of the books up for the award are a testament to the continuing appeal and popularity of romantic fiction and all its subgenres.’

Sponsored by Dr. David Hessayon OBE in honour of his late wife, Joan, who was a novelist, RNA member and supporter of its New Writers’ Scheme, the award showcases a variety of debut novels within the romantic fiction genre. The novels are judged by a panel of published authors from the RNA and publishing industry professionals. Previous winners include Jo Thomas, Charlotte Betts, Lorna Cook and Caroline Day.

The New Writers’ Scheme provides support to unpublished writers of romantic fiction. Manuscripts can be submitted for assessment and are critiqued by published authors. In addition, the members of the scheme can attend RNA events and participate in members-only activities and networking opportunities.

The ceremony to announce the winner will be held at 6.30pm on Saturday 16th July 2022 at Harper Adams University, Newport, Shropshire, as part of the RNA’s annual conference. 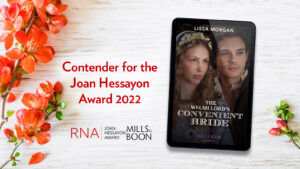 Wales, 1294. Hiding a disfigurement, Eleanor is already lacking confidence when she arrives at her future husband’s cheerless Welsh castle. As revolt against the Crown breaks out, Eleanor’s heart rebels, too. Is she a fool to hope for love from Rhun ab Owain, a man with scars of his own?

About the Romantic Novelists’ Association

The Romantic Novelists’ Association (RNA) is a professional body primarily for writers of romantic fiction. Founded in 1960 to provide a voice for romance authors and to be a network for writers, it continues to raise the prestige of romantic fiction and encourage romantic authorship. Their 1000+ membership includes writers across the spectrum of commercial and women’s fiction, along with publishing industry professionals, booksellers, and book reviewers. In addition to organising annual publishing awards, they also host a range of workshops, talks, networking events, a three-day annual conference, and provide support to unpublished authors through their New Writers’ Scheme.

For more information about the Romantic Novelists’ Association, please visit their website: https://romanticnovelistsassociation.org

Please join us in congratulating Lissa Morgan on Twitter!