Mills and Boon Historical author Jenni Fletcher joins us to talk about her Regency Belles of Bath series. If you’re a fan of Bridgerton, you will love these books!

I’d like to start with an excuse. I’m really bad at talking about my books. I mean, really, really bad. While I’m writing, I’m completely (possibly unhealthily) obsessed, but the moment they’re finished, I forget almost everything. I’ve actually been to known to ask reviewers for help with plot details if I ever I need to talk about them afterwards (like now!) because I honestly can’t remember anything more than names.

So I’m basically a serial monogamist when it comes to writing. The moment my characters are happy, I prefer to let them waltz off into the sunset while I move on to the next ones. And yes, I know I should keep records, or one of those amazing charts which lists every character’s age and eye colour, but despite all evidence to the contrary, I always think I’ll remember. In summary, please don’t worry about spoilers here because I couldn’t give them if I tried!

My total lack of notes made writing a series set in a biscuit shop in Bath a bit of a challenge, but in my defence, the only reason I started it was because I didn’t know it was going to be a series. I thought An Unconventional Countess (inspired by a tin of biscuits on my parent’s kitchen table) would be a one-off, but then I had the idea for The Duke’s Runaway Bride, only I couldn’t logically write that without first writing Unexpectedly Wed to the Officer and then there was one character left who I couldn’t leave behind because she was my favourite, which led to The Shopgirl’s Forbidden Love…

Nancy is a bit of a stereotypical redhead with a fierce temper and strong independent streak, whilst also being incredibly loyal and kind-hearted. I’ve tried to alternate between aristocratic and working-class characters in this series because, whilst ballgowns are lovely, I’m pretty sure my own family back in the Georgian era would have been the ones baking and selling biscuits rather than buying them, so I wanted to represent that.

Nancy appears only very briefly in the first book (shockingly, she doesn’t get a single line of dialogue) but then develops very quickly over the next two stories. So does her romance with Jem Redbourne, who owns a shop close by. There are lots of hints about their turbulent relationship, but neither of them ever explains anything about it. This was because I genuinely had NO idea how it was all going to work out, which got me into another tangle and forced me to do something I usually avoid at all costs (read my own books again!) but I really liked the idea of a romance spanning several years and taking a long time to grow, especially one that happens in the background of the other stories so that I could bring back all the previous characters. So, when Nancy and Jem finally get their HEA, which of course they do, it felt like a natural conclusion.

I’ve been told that reading this series makes you want to eat biscuits and I apologise whilst also totally endorsing this approach (I personally suggest dark chocolate and ginger or – if you can find them – Bath Olivers). I hope you enjoy the book and thanks for reading, 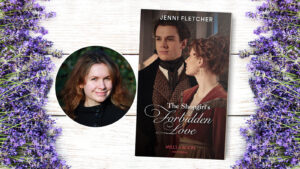 Belles biscuit shop is more like a home than a place of work for Nancy MacQueen. The shared attraction between her and James Redbourne, the handsome owner of a nearby store, has been simmering for years, but she’s refused to trust his feelings for her. After all, they’re not remotely in the same social class. Until, one day, Nancy can no longer deny her love – only to find he’s become engaged to someone else!

OR start the series with Book One, An Unconventional Countess which is currently 99p on Kindle.

Michelle Willingham: The inspiration behind my new Legendary Warriors series