‘You could not bear it, either?’

A voice from behind made him turn and the girl in white was standing near the tallest potted tree, a drink in hand as she gazed out on to the stormy night.

In this setting she looked untouchable and serene, the debutante from inside swallowed up by a girl who was much more sure of herself.

‘I seldom last long at this sort of thing.’ He tried to keep the sting from his reply.

‘Because you prefer something different entirely?’

As she sipped at the drink he saw dimples appearing in her cheeks.

‘You know of my alarming reputation, then, Miss Barrington-Hall?’ It was no use beating around the bush for the girl looked like someone who would appreciate directness.

‘Barely. I have just arrived in London, but you do not strike me as a man overly comfortable within polite society.’

‘With such instincts you will do well here, I think.’

He could hear the humour in his voice as he said it, but she frowned.

‘“Well” in the manner of procuring a husband with an elevated title who can support me in the way I am accustomed to for the rest of my life?’

He heard the irritation easily and finished his explanation.

‘I was thinking “well” in the way of becoming an Original. I imagine it to simply be your choice.’

‘You allow the feminine sex too much power, sir. London is not a place where women hold much of that, I am afraid.’

‘You are from the country, then?’

‘I am and I much prefer it to the city.’

Again he smiled. It was not often that he talked to women like this and one who gave no impression at all of wanting any sort of intimacy from him, her aloofness becoming both a challenge and a question.

‘The Barrington-Halls are a well-respected family.’ Perhaps if he appealed to her connections she might be more forthcoming.

‘A family, I suspect, who put much stock in the way of rules and propriety.’

‘Which suits me completely, sir.’

‘I have heard you enjoy rules?’

‘Just as I have heard that you do not.’

‘An impasse, then. Perhaps I could persuade you to take another point of view?’

‘But why would I want to do that, Mr Moreland, when safety in society lies in the strict observance of manners?’

She raised her glass at him then and simply disappeared through another set of French doors he had not noticed behind her, one moment there and then gone. Like the trickery on show at a country fair, the impression startlingly theatrical.

Intriguing and titillating. Had she meant for it to be so?

He did not want to follow her for she had dismissed him quite directly and, if Oliver knew the ways of one thing, it was the way of women.

She had been surprising, this mysterious girl with her unusual green eyes and floating white dress, so he would be, too. Already his mind was beginning to work with a plan. 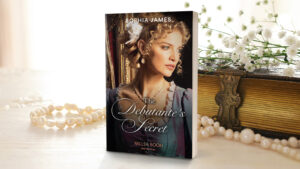 The Debutante’s Secret by Sophia James

Tempted by a dissolute rogue…

Debutante of the season Esther Barrington-Hall is looking for a steadfast, responsible husband after a dreadful childhood with her destitute mother. Aristocrat Oliver Moreland is a notorious rake, and Esther knows it would be wrong to give up her new-found life of safety for a man like him. But he is exciting—and undeniably sexy. And dangerous, too. Because he is the one man in society who knows about her past…