Rebecca is the quiet sister, the inventor in her family…and Jules is the only man to ever charm her!

‘Howell Manufacturing has great plans for the invention. We think the portability of the device could make it a tool that every physician will begin to carry as matter of fact in their medical bags, not just here in England, but internationally as well.’

‘Internationally? Truly?’ It was the daughter, Rebecca, who spoke for the first time since being introduced. Her face shone with delight at the news. ‘How incredible, how wonderful!’

‘It is and I am here to make sure that all happens as smoothly as possible,’ Jules smiled briefly in her direction and turned his assurances back towards Dr Peverett. ‘I would love to see the device first-hand. I’ve seen the drawings and the prospectus that were sent, of course.’ Not technically a lie—they were in the folder Win had given him and he had thumbed through it this morning on the train after he’d read the newspaper. But he was no expert on the device although ultimately that didn’t matter. It only mattered if he got Dr Peverett’s signature on the contract.

The daughter rose, still beaming, much to his surprise. ‘I would be happy to take you down to the workshop.’

Jules stood, not wanting to be rude, but definitely perplexed. This seemed an odd development. ‘Will you be accompanying us, Dr Peverett?’ His gaze drifted between the doctor and his daughter. Something was afoot.

‘I think Rebecca can handle it,’ Dr Peverett said confidently. ‘It’s her invention, after all.’

‘Hers?’ Jules enquired politely, smiling through his shock, his mind reeling. He’d misjudged her. She was more than a wallflower. Quite a bit more, in fact, and that was alarming. His anxiety returned as he began to piece the revelation together. The daughter was the inventor?

‘Yes.’ The daughter’s cognac eyes flashed in challenge. ‘I am R. L. Peverett.’

‘Well, this is indeed a surprise.’ 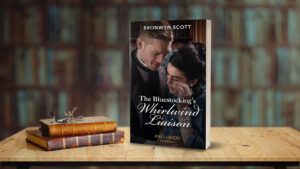 Rebecca has always been the inventor of the family, much preferring her workshop to a ball. But she’s thrust out of her familiar life when she meets Jules Howells, a member of a manufacturing family who are interested in her latest invention. At first, Jules seems a carefree rogue…until their ever-more passionate encounters show Becca a depth to him she cannot resist!

Jenni Fletcher on her Regency Belles of Bath series