A race to save his crown results in an unexpected marriage in Claimed to Save His Crown by Pippa Roscoe. Read on for an exclusive excerpt…

As Henna made her way towards Aleksander’s office she knew already that she didn’t want to see him. She didn’t trust herself around him. Rather than going away, each time she saw him her feelings got worse, making her say and do and want things that she really shouldn’t.

Henna stopped outside Aleksander’s office door, her gaze snagging on the patch of new plaster and paint covering the damage done by Lykos Livas a few weeks ago and proof that Aleksander drove people to their limits. Even now she felt her heartbeat gather in speed at the mere thought of asking him for the information Sven needed.

No. She wouldn’t lie to herself. It wasn’t the thought of a confrontation with the King that made her pulse rate pick up. Thrusting the wayward direction of her thoughts back, she knocked on the door.

‘Come.’ The sound of his frustration penetrated the closed door and she closed her eyes, gathering herself, before pushing the door open and entering his domain.

The office was bathed in the evening’s shadows, the low lighting making it something altogether different than what she was used to. Logs burnt gently in the fireplace despite the easing of the cooler months into the warmth of summer. A half-drunk whisky was on the mantelpiece and she turned to the lamplit desk that mirrored her own in terms of sheer volume of paperwork. The door to Aleksander’s private living area opened and he came through, buttoning up his shirt, forcing Henna to look away as if she had caught him in a state of undress.

Heat spread to her cheeks that had nothing to do with the fireplace and she cleared her throat. By the time she looked back, Aleksander had looped a tie around his neck and still she felt as if she were seeing more than she should. It was personal. It was…too much.

‘What is it?’ he asked abruptly, looking around the room for something.

‘Sven needs the dietary information for tomorrow’s delegation,’ she forced out around the pulse beating heavily in her throat.

Aleksander threw a curse into the room and leaned over the desk to retrieve a file. Her eyes were drawn to the way his torso turned, his thin hips bracketed by a leather belt, and a low thrum started in her body. It started as something quiet, but as he turned and stepped towards her, closing the distance between them, it grew louder and louder until she could hear it above the pounding of her heart. 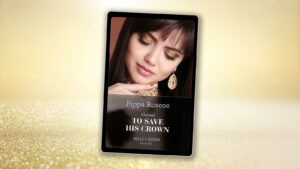 Claimed To Save His Crown by Pippa Roscoe

After lady-in-waiting Henna stops a marriage that would have protected King Aleks’s throne, he’s furious. Until a transformational kiss awakens him to a surprising new possibility that might save his crown… And it starts with her!

I Got the Call! Meet New Author Lela May White