‘Am I to understand that you’re offering your resignation, Miss Bryant?’

‘My lord, if you wish it I will leave my post straight away. I can only apologise for the state in which you’ve found us all on your arrival.’

James said, ‘You can’t help but agree that I’ve no reason to be impressed so far.’ He saw that she was now very pale, though her gaze was still steadfast. ‘But it probably didn’t help,’ he went on, ‘that I gave no warning of my arrival today. In conclusion, Miss Bryant, I feel it would be easier for us all if you stayed on in your post, at least for a while.’

She widened her eyes slightly, but otherwise she looked—deuce take it—she didn’t look pleased or even a little relieved. Perhaps she thought him a fool for giving her another chance. James frowned. Well, maybe he was a fool, but he was also curious, because she puzzled him.

She was far too well-bred both in her voice and her deportment to be a housekeeper. She was also too young. He could see little of her figure under that hideous dress and apron, but there was nothing particularly wrong with her face. Though that big cap cancelled out any feminine appeal, especially since it completely hid her hair—which was probably cut short, he told himself, and mousy too.

He realised she was speaking again. She said, a little incredulously, ‘So you’re not dismissing me?’

‘Not yet.’ His eyes never left her face. ‘There’s a saying in the army that a quick decision can lead to bad results.’ He rose to his feet. ‘And that,’ he added, ‘is all I have to say for the time being. I imagine your routine will be rather busier now that I’ve taken up residence, so you’ll have to let me know if you need more staff.’

She had risen to her feet also. ‘Of course. My lord, will it suit you if your evening meal is served in the dining hall at eight?’

‘Indeed. And there’s one more thing, Miss Bryant. You’ll doubtless have heard stories about me.’

‘Don’t try to tell me you don’t know.’ He spoke curtly because he had no time for pretence. ‘You must have heard that my reputation has been somewhat damaged of late. But absolutely none of the things that are said about me are true.’

She curtsied. He thought that perhaps she said, very softly, ‘Of course.’ That was all. And then she departed, leaving James feeling frustrated and confused. There was no doubt about it—the woman was ridiculously out of place here and would certainly have to go, sooner rather than later. So why hadn’t he accepted the resignation she’d so swiftly volunteered? 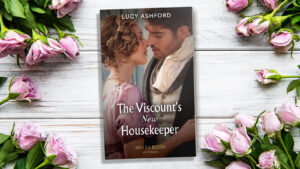