If you’re a fan of Historical romances featuring rebellious heroines and the friends-to-lovers trope, you will love The Duke’s Rebellious Lady by Eva Shepherd.

Read on for an exclusive excerpt…

He had rescued her from more scrapes and accidents than she cared to remember.

In fact, all her memories of her childhood summers seemed to contain Guy Parnell. At the time she had never questioned why he spent so much time at both their London home and their Dorset estate—had just accepted Guy as part of the boisterous gang of Springfeld children. It wasn’t until she’d got older that she realised her parents had extended the invitation to him each holiday because they’d known of Guy’s situation and wanted to provide him with the family life he hadn’t had at his own home.

‘I might have known you’d be riding one of those bicycle contraptions. You always were an adventurous child, weren’t you, Daisy Chain? Or should I call you Lady Daisy now that you’re all grown up?’

‘Yes, I ride one of those contraptions,’ Daisy said, hoping that would be the extent of his teasing. ‘And Daisy will be fine, but I suppose I should call you Your Grace?’

He made a mock frown. ‘I’d be offended if you did. I don’t think I’ll ever get used to being the Duke of Mandivale, and whenever anyone calls me Your Grace, or uses my title, I still keep thinking they’re talking about my father.’

He was joking, but the joke seemed forced, as if hiding a wealth of pain. That was to be expected. After all, who would not feel pain with a father like the late Duke of Mandivale?

‘And I do find your outfit very…interesting,’ he said, his gaze flicking to her bloomers and exposed calves encased in blue- and red-striped stockings.

Daisy fought not to squirm as he scrutinised her clothing again.

‘And rather flattering,’ he added. Daisy wasn’t sure if he was jesting or serious. Few people outside the Rational Dress Society approved of a woman wearing trousers, and most men either mocked them or became irrationally angry, as if a lady in trousers was against the rules of nature. But had she heard a note of approval in Guy’s voice, even appreciation? She dismissed the possibility. Guy Parnell had always seen her as Nathaniel’s young sister, and he was unlikely to change now. And, despite her unsettling reaction to his gaze, or maybe because of it, she most certainly would not want him to see her in any other way. 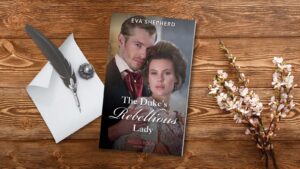 Taking Lady Daisy Springfeld to his estate to convalesce after her cycling accident is the least the Duke of Mandivale can do to help the family who’s been so kind to him. But now Daisy has grown into a beautiful, rebellious young lady, Guy knows he must suppress any lustful thoughts. Only, all too soon they’ve gone beyond friendship and the taste of the forbidden is too tempting to ignore…!