A ‘meet-sweet’ replaces a meet-cute in The Billionaire Behind The Headlines by Rachael Stewart, where baker heroine, Bree has a very awkward and unexpected first encounter with billionaire Theo. Read about it below…

Bree grabbed a spatula and went back to the baking. Baking was safe, reassuring, methodical. She was folding in the flour when the banging started up on the front door once more.

Clutching the bowl to her chest, she stormed into the bar area. ‘For the love of God, knock on that door again and I’ll have you with my spatula.’

Banging suddenly started up at the back door, joining the thunderous knocking at the front and the shouts she didn’t bother trying to decipher. Spinning away, she headed back to the kitchen. She wasn’t even across the threshold when she heard someone at the rear door once more, playing with the handle.

‘You have to be kidding me.’

She was already approaching the door, spatula raised, all fire as she prepared to stand their invader down – even beat them down, if necessary. This was getting out of hand. Maybe she ought to call the police.

‘The B & B is closed, and the press is not welcome!’ she shouted through the wood. ‘Take your questions elsewhere!’

No response…other than what sounded like a key turning in the heavy lock. What on earth? Could journalists pick a lock? Would they really sink that low?

And now they had her name? Unless it wasn’t the press at all… She swallowed down the nerves, raised her chin. ‘Depends. Who’s asking?’

The door swung open and there, filling the rear entrance, was the magazine cover model himself in all his very real, sex-god glory.

He cocked a brow and her cheeks burned. Had she said it out loud? Called him out as a sex god to his face?

She swallowed with a squeak. ‘I told you we were closed.’

‘No?’ Her heart was threatening to leap out of her chest, her brain struggling to function over the burn. ‘Just breaking and entering, then?’

His grin lifted to one side and he combed one big, strong hand through his floppy blond locks, his pale blue T-shirt straining as his muscles flexed. ‘Is it breaking and entering if one’s been told where the spare key is?’ 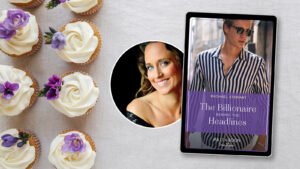 The Billionaire Behind The Headlines by Rachael Stewart

Bree has escaped the city to heal her heart in a village bakery. And then notorious billionaire Theo walks through the door. The man behind the headlines is charming, but intriguingly cynical about love. Accepting his invitation to Paris might be a mistake – or the best decision she’s ever made…

Read now in eBook or in a two-in-one paperback which also features It Started with a Royal Kiss by Jennifer Faye.

Ellie Darkins on the inspiration behind her new trilogy!