The Earl’s Inconvenient Houseguest by Virginia Heath is an enticing enemies-to-lovers romance set in the Regency era.

Read on for an exclusive extract…

Rafe hovered outside the sickroom uncertain. As much as it felt wrong to intrude on another’s grief, it felt more wrong to leave Sophie to it all alone. Especially as she apparently was all alone if the physician was to be believed. He hoped she had some family somewhere. Someone who would take her and her aunt in. Despite several lectures to his niggling conscience that her future really was not his problem, something about her made it seem as if she were.

Even though he hardly knew the woman.

Even though she had sabotaged his plans and turned the entire village against him.

Even though he had saved her life and her aunt’s and her blasted cat’s and ruined his shoulder in the process, so he had already gone above and beyond.

He ran his frustrated good hand through his freshly washed hair and allowed himself a quiet growl. Damn it all to hell! Blasted woman had been nothing but trouble since the moment he had first set covetous eyes upon her.

He blamed her sometimes soulful, sometimes skewering, sometimes sparkling and always savvy dark eyes for that. Give him a sharp, clever, witty tongue any day over a shallow and simpering miss whose preferred method of conversing was with her artfully batting lashes.

He’d wager every penny of his new fortune that Sophie had never felt the urge to bat her lovely dark lashes at a fellow in her life. Her expressive eyebrows, however, had a language all their own. Behind that door, he already knew that they would be sad. Scared. Exhausted. Yet when he entered she would mask all those emotions out of pride irrespective of the fact her entire world had just imploded. And for all his lofty aims to remain detached from everyone in this godforsaken village and all of their problems, he couldn’t ignore that. Not from her and certainly not after her compassion towards him and his brother last night.

Rafe steeled himself before he tapped on the door, then slowly pushed it open in case she needed a few moments to compose herself. ‘How is she?’

‘There has been no change.’ The soot-stained nightgown was gone, replaced by one of the maid’s dresses, and a pale and drawn Sophie seemed surprised to see him. Then that was replaced by awkwardness at being caught looking so lost—exactly as he had predicted. Instantly she sat straighter as the ghost of a smile whispered across her mouth. Fearless, proud and stoic to the bitter end. ‘You look better though, so that is a relief. How is the shoulder?’

Rafe stared down at the sling which did, to its credit, ease some of the discomfort. ‘A bit tender but thankfully back where it is supposed to be. I shall apparently make a full recovery.’

‘Does Dr Able know that you are up and about?’

He nodded at the subtle admonishment. ‘The sawbones has given his express permission but has put me on light duties for the next few weeks. Absolutely no galloping, lifting or wrestling mad cats.’ Which he supposed brought him neatly to his flimsy excuse to visit her. 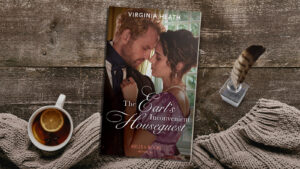 The earl she loved to hate

…until she stayed in his mansion!

Sophie Gilbert has thwarted the standoffish new earl’s plans to sell his country estate and the quaint village which forms part of it. But when disaster strikes and he offers her refuge, she must reconsider everything about this vexing, determined man. After the heartbreak in her past, it’s a revelation to feel her pulse racing and her body yearning for his touch…