Michelle Smart’s new Modern romance, Claiming His Baby at the Alter has it all: fiery passion, shocking discoveries and a swoon-worthy brooding billionaire hero!

Read on for an exclusive extract…

Ignoring Ramos’s outstretched hand of help, Flora hoisted herself onto her feet.

Her baby was coming.

She’d get the farce of a wedding done with, ensure Ramos kept his word about Justin, and then she would tell him he was going to be a father imminently.

Plenty of time, she assured herself. Ten minutes between contractions was fine. Her English midwife had told her she probably wouldn’t be admitted into hospital until the contractions were four minutes apart. That would likely take hours. Right now, she needed to concentrate on Justin’s freedom. She had no idea how Ramos would react to her being in labour and didn’t dare risk telling him just yet.

She was in labour!

A zing of pure excitement flooded her. Her baby was coming!

Soon, very, very soon, she would meet her baby.

‘I assume the financial package is to your liking,’ Ramos observed as they walked up the corridor.

The tone of his voice made her curious. ‘Sorry?’

He shrugged. ‘You were smiling.’

‘Oh. Right. You assumed I was smiling about the money?’

‘In a few minutes you are going to be a very wealthy woman.’

His cynical assumption barely doused the excitement still rippling inside her. Her baby was coming!

‘Just set my brother free. That’s all I care about.’

And that my baby is born safe and healthy.

She stopped walking and faced him. ‘Believe what you like, Ramos…’ oh, she did enjoy the tightening on his face when she addressed him by his surname ‘…but I’m marrying you for Justin’s freedom. You will never—’

Her intention of telling him he would never be a husband to her in the true sense of the word was cut from her tongue when another contraction hit.

Luckily she was close to a wall and slammed a hand on it to steady herself, and managed to focus on her watch. Uh oh. Nine minutes. 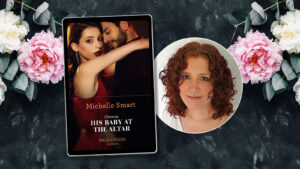 Claiming His Baby at the Alter by Michelle Smart

After their passionate encounter nine months ago, notorious billionaire Alejandro shut Flora out, believing she’d betrayed him. But, discovering she’s pregnant, he demands they marry – immediately! And within minutes of exchanging vows, Flora shockingly goes into labour!