Mills and Boon Modern author Emmy Grayson talks about writing her first royal romance which was inspired by Cinderella!

With royal weddings, babies and all kinds of stories in the news, I decided to tackle my first Mills & Boon Modern royal romance last year. I knew exactly what I wanted to do for my first one: a Cinderella-themed love story.

Cinderella is one of my favorite fairy tales, and has been since I was a child. I’d only ever seen the glamorous side of royal romances; the beautiful gowns, falling in love with a prince, leaving a life of hardship for one of luxury. I read numerous stories and interviews with current and former royals about what they loved and what they struggled with when it came to royal life. I revisited multiple variations of the Cinderella tale. Most importantly, I read other Mills & Boon romances! Reading romances like His Scandalous Christmas Princess by Caitlin Crews, Queen by Royal Appointment by Lucy Monroe and Cinderella’s Desert Baby Bombshell by Lynne Graham was a huge help, too. Diving into the passion, high emotional stakes and incredible destinations helped me generate ideas for creating the intense romance that develops between Briony and Cass as they fight their simmering attraction and work to balance duty with love.

What ended up being my favorite part of writing my first royal romance, though, was the research and little details. It was so much fun to incorporate some of my favorite themes—fairy tales, revenge, an arranged marriage—into their love story. Probably my favorite part of royal life, both in real life and in fiction, is the fashion. I saved so many incredible dresses on Pinterest and clicked through way too many photos of royals over the years, from the Duchess of Cambridge to Grace Kelly.

I also got a kick out of incorporating Cinderella Easter eggs into the book. I wanted to give the wicked stepmother trope a break, so I transformed the antagonist into Briony’s stepfather, Trey. His name is a play on Lady Tremaine, the wicked stepmother in the 1950 Disney animated Cinderella. Briony’s stepsisters, Stacy and Ella, are twists on Anastasia and Drizella. Bartender Gus, is based off Gus the mouse, my favorite character from the cartoon. And while I didn’t have an explicit reference to Cinderella’s fairy godmother, it was fun mentioning the heroine from my last Cabrera Brothers book, A Deal for the Tycoon’s Diamonds, who became an internationally renowned fashion designer and dresses Briony as she enters royal life.

For creating the kingdom of Linnaea, I wanted to move away from the summery locations I had used in my Infamous Cabrera Brothers trilogy, like Spain, southern France and Italy’s Amalfi Coast.

A lot of my inspiration for Linnaea came from an incredible trip I took with seven family members to Germany in 2018, which included a visit to the aptly nicknamed “Cinderella castle,” Neuschwanstein. The jaw-dropping architecture, the pine forests that sweep up the hills and the Alpsee, a deep blue lake surrounded by mountains frequented by swans, all influenced what eventually became the country of Linnaea, home to the feisty princess Briony and her brother, Prince Alaric Van Ambrose, who will be tangling with an unexpected royal baby in the second book, The Prince’s Pregnant Secretary.

I hope you enjoy reading Briony and Cass’s love story in A Cinderella for the Prince’s Revenge with Mills & Boon! 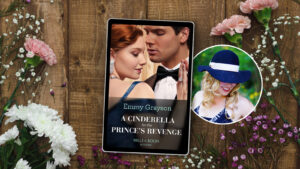 Marrying Prince Cass allows barmaid Briony to join the royal family she’s never known. Their powerful attraction sweetens the deal…but will it still be a fairytale after Cass’s admission that making her his bride is part of his revenge plan?