We’re delighted to be joined on our blog by Charlotte Hawkes, whose new Medical duet, Billionaire Twin Surgeons is out on April 28th. If you love workplace romances, intelligent, captivating characters and shocking family revelations, this duet is for you!

Thank you so much for inviting me – I’m incredibly excited to be doing this blog because it’s always so lovely to connect with such wonderful readers!

To that end, allow me to share with you a couple of special secrets about the inspiration behind my latest Billionaire Twin Surgeons duet…

Firstly, that Dr Basilius ‘Bas’ Jansen, didn’t start out a twin at all – or at least, he didn’t share that crucial fact with me (or with his best friend, Dr Grace Henley) until it was about halfway through the first draft of his story!

I was aware that Bas had a brother; an estranged figure who hovered hazily in Bas’ past, pushed to the recesses of our Hero’s brain. I also knew that it was something about this history – perhaps the fact that the brothers had never been close – that had molded Bas into the closed-off man that he was at the start of the book; the kind of man that only a truly special heroine would be able to reach.

…I had originally intended Bas’ best friend – foetal surgeon, Grace – to be his heroine.

Grace had all the qualities Bas could ever need in order to reach that closed off part of himself, and help him finally unlock his shattered heart.

Yet the more I wrote of Bas and Grace’s story together, the harder they blocked me. They were friends – the best of friends – but their moment to be a couple, they told me, had passed. Plus Bas’ heart, it transpired, lay elsewhere.

And so in stepped Naomi. Intelligent, beautiful…and already pregnant with Bas’ child. They were so perfect for each other that I soon wondered how I could have ever thought of pairing Bas off with anyone else. The real story was in how I was going to get these two fiercely-guarded, painfully-independent characters see how right they were together.

Slowly, so slowly, Bas began to open up to Naomi; and the more the character of Henrik – ‘Rik’ – began to take shape. Not simply a brother, but a twin. A plastic surgeon, just like Bas. And a character so compelling, and so deserving of his own story.

It became clear that the reason Bas was so closed off wasn’t because the brothers had never been close but rather it was because they had once been so close – almost inseparable – which had only made these heroes mutual sense of betrayal that much more impossible to bear.

Both Bas and Rik felt they’d made an enormous sacrifice for their twin, and each had felt that the other hadn’t even cared about it. But whilst Bas had dealt with the loss by spending the last couple of decades stuffing his history down and pretending his brother had never existed, Rik had spent the same decades desperately trying to track down his long-lost twin.

Of course, the timing couldn’t have been worse for Bas, who was fervently trying to wrap his head around becoming a father. So, to stall his brother, he sent the only person he knew he could trust – his best friend. And of course, the attraction between Rik and Grace was unexpected, unwelcome…and undeniable.

As honourable as they both are, and as valiantly as they tried to resist temptation, the pull between them wasn’t so easily ignored. Grace and Rik were left with a truly unenviable choice to make.

Welcome to Thorncroft Royal Infirmary, and the stories of Naomi and Basilius, Grace and Henrik. I truly hope you enjoy getting to know these four wonderful characters every bit as much as I have. 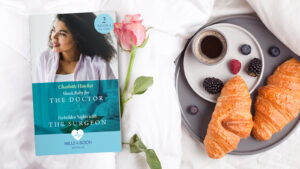 Shock Baby for the Doctor

In this Billionaire Twin Surgeons story, surgeon Basilius has just one rule: don’t get attached! After a childhood where Bas was only ever let down by those closest to him, he’s hesitant to trust anyone. So, why can’t he stop thinking about nurse Naomi? Still, as Bas fights to forget her, he hits a stumbling block.

Naomi is back, as his new colleague – and she’s carrying his baby!

Forbidden Nights with the Surgeon

In this Billionaire Twin Surgeons story, it’s surgeon Rik’s first day at Thorncroft Royal Infirmary and his plan is simple: to reunite with his long-lost brother and put the ghosts of their past to rest. Until Rik is reunited with Dr Grace…who completely derails his plans! Because Grace is not just the woman that he spent one, unforgettable night with – she’s his brother’s best friend!

JC Harroway on her DARE, Medical and Writing Journey