Mills & Boon is delighted to announce that Emma Denny has won Romance Includes Everyone, a competition to find new romance novels featuring LGBTQI+ protagonists hosted in collaboration with the Romantic Novelists’ Association. As the winning entry, Denny’s historical romance novel will be published by Mills & Boon. 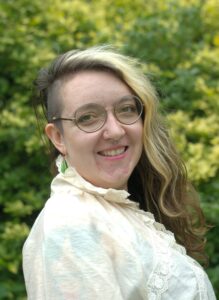 Romance Includes Everyone was open to anyone who writes romances focusing on LGBTQI+ characters, including published and unpublished authors who are both agented and unagented. The competition was launched as part of Mills & Boon’s continued commitment to building a truly inclusive list that serves as the home of romance for all readers.

Denny’s winning novel is a medieval historical romance following Penn, the son of an Earl, who escapes on the eve of his arranged marriage for one last night of freedom. Outside his confines, Penn meets a tracker called Raff, who assumes Penn to be a heartbroken servant and helps him to escape. What Penn doesn’t know is that Raff is the brother of the woman he was supposed to marry, and desperate for freedom himself. As they flee Penn’s homeland, neither can deny their attraction. But their newfound precious freedom cannot last, as their true identities are revealed and Penn’s father readies an army to bring him back.

Denny said: ‘This is an absolute dream come true. I am thrilled to have won and so excited for everyone to meet my characters (and hopefully fall in love with them as much as I have!). For me, LGBTQI+ romance is important because it gives queer people like myself the much-needed opportunity to see ourselves reflected in the books we read. But even more important is to see stories where the tension or drama doesn’t necessarily come from your queerness, but from the trials and tribulations of falling in love. I adore romance fiction, and think it’s important that everyone is able to indulge in the genre, no matter who they love.’

The judges said: ‘The Romance Includes Everyone competition was a real passion project for the teams at Mills & Boon and the RNA so we were delighted to see such a huge amount of varied and accomplished submissions celebrating LGBTQI+ romance. The quality of the manuscripts submitted made picking a winner very difficult, but the judges were utterly captivated by Emma’s historical romance. It’s the perfect mix of adventure, emotion and passion between two characters that we instantly fell in love with so we’re delighted to welcome Emma to the Mills & Boon list and can’t wait to introduce readers to Penn and Raff.’

We’re still interested in LGBTQ+ love stories. If you missed the deadline but would like to submit your manuscript, please email submissions@millsandboon.co.uk