We are delighted to introduce our guest blog writer, Annie O’Neil. Annie sets pulses racing in her Medical romances about dedicated, delectable doctors in the high pressure world of medicine.

Today, she shares some of her wonderful memories of Hawaii (we’re not jealous at all!!) which was the inspiration behind her new book, Hawaiian Medic to Rescue His Heart.

Aloha!!! Writing a book set in Hawaii during the middle of lockdown wasn’t just a joy, it was a glorious trip down memory lane.

My father was in the US Navy, and when I was four we moved to Hawaii for three years. Unbeknownst to me it was in the height of the Hawaii Five-O television craze. I probably wasn’t allowed to stay up that late which would explain not understanding what ‘Book him, Dan-O’ meant.

My first memory of my new tropical life was of how hot the sand was. I was deeply ungrateful and resented the hot white sand obstructing my journey to the inviting sea. We’d just moved from the Pacific Northwest (not far from where Debbie Macomber set her famous Cedar Grove series) and we were not accustomed to Hawaiian heat. I recall us being very ungrateful for our transfer…right up until we discovered snorkelling. It was like swimming in an aquarium! I vividly remember discovering that coconuts didn’t grow as the brown-shelled things my father used to bring home from tour (we’d all troop down to the basement and watch as he put it in the vice to drill three holes in to drain the coconut water and we’d all get an equally divvied portion. SO EXOTIC!). Coconuts, I learnt, grew in huge green husks. My mother had a little pot of white paint and would paint the addresses of friends back home and post the entire thing (with stamps on) back to the Mainland. We had a ukulele. I took one day’s worth of hulu classes before showing a lack of commitment (the tap dance was next door and that looked much more exciting). I learnt how to take naps on tatami mats, build huge sandcastles before the tide came in and filled the moat and make leis, the honey sweet scent of which I can remember to this day. We used to play in the tropical rainstorms (pretty much daily), whooshing down the slide into the red mud puddles. My mum would make my sister, brother and I stand in a line and hose us off before we were allowed back in the house. It was a pretty idyllic place to be a kid and, by the time we were transferred back to the Pacific Northwest, we thought our new home was freezing and pined for the bath warm waters of Polynesia.

I didn’t go back for a few years bar a couple of layovers at the Honolulu Airport en route to Australia (I became an avid traveller in the wake of my father’s retirement). Then I got to return with my (now former) job as an entertainment reporter when we were sent across to interview Ben Affleck and co for that year’s summer blockbuster, Pearl Harbour…on the deck of an aircraft carrier! It was amazing. And we got to stay at the Royal Hawaiian which was very fancy and came complete with a good old fashioned pig roast at a luau.

The next and last time I flew in was with my new(ish) Scottish husband for our belated honeymoon. For a number of reasons we weren’t able to honeymoon directly after our wedding, so when, three years later, a friend offered us use of their beach house in a less populous part of Hawaii we jumped at the chance. We couldn’t rent a Corvette like Magnum PI, much to my husband’s disappointment, but we did rent a canary yellow Harley Davidson. We revisted all of the old haunts I could think of, Hanama Bay where I’d learnt to swim was now a national park and we swam with turtles just a few feet from the shore. The huge seaside farms that sold amazing on-the-spot rice and shrimp with teriyaki or garlic. Riding quad bikes where the dinosaurs chased Jeff Goldblum and Lara Dern and countless others. It was amazing. It’s one of my special spots that I’m sure everyone has and, as such, writing this story – Lulu and Zach’s admittedly very different story – was a joy. I hope you find it as exhilarating a journey to an HEA as I did. And…as the Hawaiians say when they’re either coming or going….ALOHA! 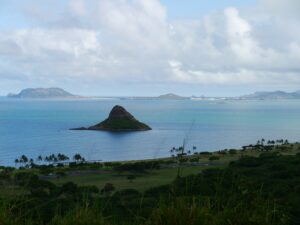 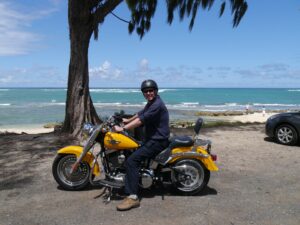 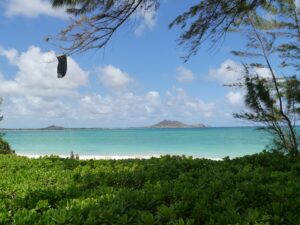 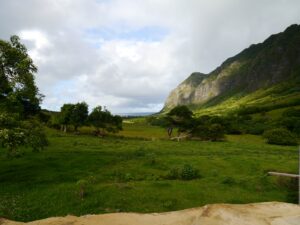 In need of some summer escapsim from the comfort of your sofa? Read Hawaiian Medic to Rescue His Heart by Annie O’Neil now!

Annie Claydon and Louisa Heaton on their new Medical duet!