We caught up with the lovely Annie Calydon who spoke to us about her new romance, Stranded with the Island Doctor.

Doctor Mel is finally able to take some ‘me time’ and travels to the Maldives for a break. Until a tropical storm tears through the island and Mel doesn’t hesitate to help. This involves working alongside Rafe. At first, there’s tension between them, then there’s chemistry…

For me, inspiration can be an unpredictable process. I’ll spend ages trying to think my way through a new storyline, and then when I least expect it a different idea pops up out of nowhere. Something I’ve seen or read strikes a chord, or maybe a situation flips itself on its head and turns into something new and different.  But Stranded with the Island Doctor wasn’t like that at all. This book had a direction of its own, right from the start.

For some time, I’d been wanting to write a romance featuring a slightly older couple. Two people who’ve overcome real trauma, got to know themselves a little better and who feel that they’re finally settling in to their lives. Mel has achieved many of her ambitions and values her home and her garden as quiet places that feed her yearning for structure and calm. Rafe, on the other hand, has managed to combine the demands of bringing up his son alone with his impulsive and adventurous spirit. Neither of them is about to give up the life that they’ve built lightly, because it’s been a journey for them both to reach a place where they can feel fulfilled and content.

At 46 and 50, Mel and Rafe may not be able to shrug off an all-nighter the way they did when they were student doctors, but they’ve still got a lot of life left in them. Maybe more so than when they were younger, because they’ve already worked through many of the things that held them back.

But where to set the book?  I thought about a number of different options before three magic words took the decision out of my hands. Tropical Island Paradise. It still makes me smile to write those words, and after so many months of lockdown the idea of taking my hero and heroine off to a sunny island was pure bliss. So Mel found herself on the holiday of a lifetime, a present from her newly married daughter. She’s wondering exactly what to do with herself for three weeks of unremitting relaxation, when news of an approaching tropical storm hits the island.  And who should come flying in to the rescue but Rafe, a doctor specialising in emergency medicine.

So I had my Perfect Storm. Rafe and Mel are two very determined people, staring at each other from the opposite sides of a divide. Neither is willing to give up their hard-won peace of mind for what will probably turn out to be a holiday romance! (Although holiday probably isn’t the right word to describe the situation they find themselves in…) Somewhere, at the centre of it all, there’s a happy place that they can both inhabit – but life has taught them that reaching out for it is the ultimate risk.

Inspiration had done its work, and Mel and Rafe were tapping their feet and waiting impatiently for me now and demanding that I did them justice. All I had to do was write… 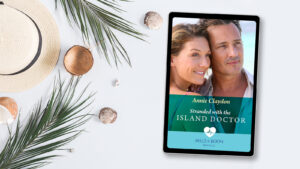 Stranded with the Island Doctor by Annie Claydon

With her daughter now grown up and married, dedicated doctor Mel is finally taking some ‘me time’. Until a tropical storm interrupts her much needed Maldives break. She doesn’t hesitate to help. But working alongside the only other doctor on the island—insufferable yet handsome widower Rafe—isn’t without its challenges. Especially when the tension between them turns into chemistry. Neither expected a second chance, but will that stop Mel from taking a leap of faith?

Read now in eBook or in paperback which also features One-Night Fling In Positano by Ann McIntosh.

An introduction to the Mills & Boon Medical series