Our wonderful author Virginia Heath reveals the inspiration behind her debut novel Miss Bradshaw’s Bought Betrothal. Find out about her fabulous twist on the Cinderella story and the process behind her characters…

I suppose all writers have their own approach to writing a book. For me, the characters always come first. Once I have my leads, know their personality traits, hopes, fears and background, the story always seems to grow organically as I write it. I never have a plot in mind or a particular end in sight.

And so it was with Miss Bradshaw’s Bought Betrothal. I wanted to write about a heroine who was not classically beautiful or perfectly slim. I wanted to write a real woman. However, rather bizarrely, it was Evie Bradshaw’s step-mother who came to me first. A money-grabbing, manipulative woman who kept her heiress step-daughter on a very short leash to selfishly maintain her own lavish lifestyle.

Once I had Hyacinth Bradshaw, it became obvious what I was writing was a Cinderella story, yet I wanted my version to be different from the traditional. You see, I never really liked Cinderella growing up. She was far too perfect. Too nice. I never understood why she stayed a skivvy when, surely, her life would have been much better if she had simply run away? That gave me the idea for my heroine. Thanks to a certain set of unfortunate circumstances beyond her control, life has passed Evie Bradshaw by. Her confidence has been whittled away and she has become a doormat. And loathes it!

Unlike Cinderella, Evie has decided to stop being a doormat and run away to live her own life as far from her spiteful stepmother as possible. To do this, she pays a dissolute Marquis to pose as her fiancé so she can leave with him to the North to plan her imaginary wedding. Somehow, and as usual I had no clue how, Evie and the dissolute Marquis would fall in love and live happily ever after.

Like Evie, I had a plan. But exactly like Evie’s, my plan fell at the first hurdle. You see, I made the dissolute Marquis so odious in chapter one I couldn’t bear to make him the hero of my story! I reached a dead end and pondered scrapping that first chapter and starting again. I went to bed, and as so often happens in my odd head, I woke up with an idea. The dissolute Marquis was the other bad guy! There were no rules about how many villains I had to have in my story. He’s a significant part of the plot but not Evie’s Prince Charming. And whilst I was about it, seeing as my Cinders was running away because she was tired of being a victim, I decided my Prince Charming would not be charming at all.

From there, Finn Matlock emerged. A gruff, surly, tortured Yorkshireman and brother to the horrible Marquis Evie has paid to pose as her fiancé. The second I introduced Evie and Finn to each other the sparks began to fly. Of course, both fight the attraction, Finn especially, so I had to throw all manner of chaos their way before they both realised they were meant to be together…

Thank you, Virginia, for taking the time to tell us about your writing process! Virginia’s new book, Miss Bradshaw’s Bought Betrothal, is out NOW! 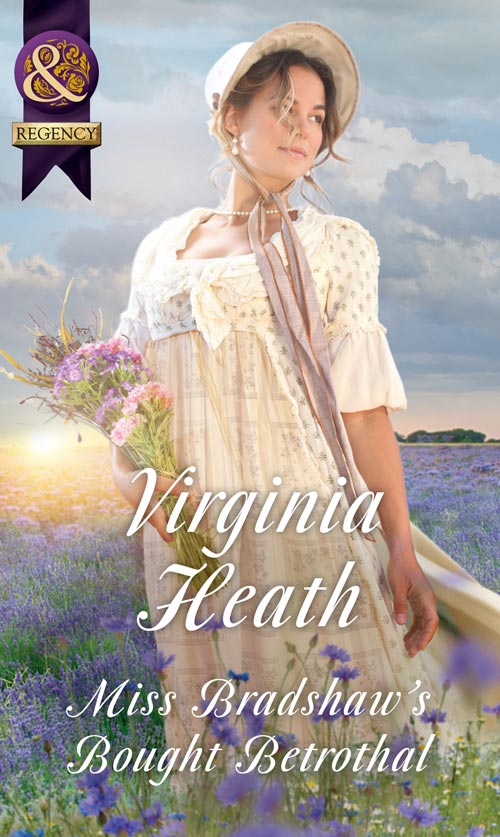